At the Well with Martin Heidegger, D. H. Lawrence and Onyofi the Chimp 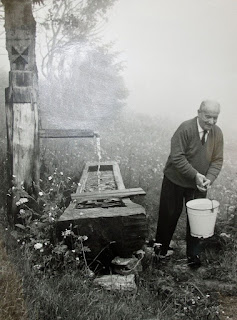 Photo: Digne Meller-Marcovicz
Water is H₂O; hydrogen two parts, oxygen one,
but there is also a third thing, that makes it water.
And nobody knows what that is. [1]
I.
There's a famous photo that circulates within philosophical circles of Heidegger carrying a bucket of water drawn from the star-topped well outside of his small, three-room cabin in the Black Forest Mountains of southern Germany.
Heidegger loved this location and he worked on some of his key texts whilst staying at die Hutte. It was, for him, an authentic dwelling place with which he claimed an intellectual and emotional intimacy [2].
It's a nice photo. And it suggests that, for Heidegger, a well is more than simply a hole in the ground that allows you to access water; there's something magical about a well and - along with natural springs - they have an important place within the cultural and religious imagination.
So, the question is: Does water drawn by hand from a well possess qualities that water from a tap does not?
D. H. Lawrence certainly thought so. He regarded indoor plumbing as something which fatally intervened between himself and the naked forces of life: "Every time we turn on a tap to have water [...] we deny ourselves and annul our being." [3]
For Lawrence, when we draw water directly from its underground source, or kindle a fire with some sticks and dry grass, we partake of the Mysteries. Like Heidegger, he believed that we lose far more with all our labour-saving appliances than we gain [4].
It sounds, of course, like nonsense to those whose thinking about the natural elements is (knowingly or unknowingly) shaped by scientiﬁc understanding; to those for whom water, for example, is merely H₂O.
But it's surely worth remembering just how miraculous clean, fresh water is and it surely wouldn't hurt if we explored the ontological status of water and started to think it as a thing, rather than simply as a resource (or standing reserve) to be exploited and consumed [5].
II.
Here's another question: Can non-human creatures - such as apes - also partake of the mysteries of the sacred well?
Lawrence would probably be okay with this idea, but Heidegger might start mumbling about the animal being poor in world and lacking hands, etc.
However, rather amazingly, researchers have just discovered that Ugandan rainforest chimpanzees are digging wells of their very own in order to access and/or filter drinking water and that the practice is spreading. This behaviour is relatively rare in the animal kingdom and it's the first time it's been observed in rainforest chimps.
It's believed that an immigrant female chimpanzee, called Onyofi, introduced the new skill into the community, after she arrived in 2015. Her well-digging activity immediately attracted attention and soon other young chimps and adult females were copying her (not so the adult males, although they happily drink the fresh water once all the hard work's been done) [6].
Notes
[1] D. H. Lawrence, 'The third thing', in The Poems, Vol. I, ed. Christopher Pollnitz, (Cambridge University Press, 2013), p. 447.
[2] See Adam Sharr, Heidegger's Hut, (The MIT Press, 2006).
[3] D. H. Lawrence, 'Dana's Two Years Before the Mast', in Studies in Classic American Literature, ed. Ezra Greenspan, Lindeth Vasey and John Worthen, (Cambridge University Press, 2003), p. 117.
[4] This does not mean that we must do away with all technology and indoor plumbing. As Heidegger writes:
"We can use technical devices, and yet with proper use also keep ourselves so free of them, that we may let go of them any time. We can use technical devices as they ought to be used, and also let them alone as something which does not aﬀect our inner and real core. We can aﬃrm the unavoidable use of technical devices and, also deny them the right to dominate us, and so to warp, confuse, and lay waste our nature."
See Martin Heidegger, Discourse on Thinking, trans. John M. Anderson and E. Hans Freund, (Harper Torchbooks,1966), p. 54.
[5] This idea is developed at length by Kalpita Bhar Paul in his essay 'A Heideggerian Perspective on Thinking about Water: Revisiting the Transition from Hydrology to Hydrosocial Nexus', Environmental Philosophy (2019). This work is available to read online (or to download as a free pdf) on academia.edu: click here.
[6] See Hella Péter, Klaus Zuberbühler, and Catherine Hobaiter, 'Well-digging in a community of forest-living wild East African chimpanzees', in Primates (2022). It can be accessed on SpringerLink by clicking here. Or, for a digested read, see Olivia Miller's article 'Rainforest chimpanzees dig wells for cleaner water' (28 June 2022) on the University of Kent website: click here.
Stephen Alexander at 21:22
Share