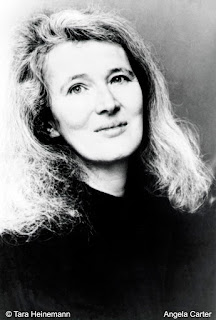 
Since her death in 1992, there has, I think, been a marked falling off of interest in the work of Angela Carter amongst readers and critics - even those of a feminist persuasion. Tastes change and her writing now seems a bit too gothic and too queer; the language used is just too rich in an age of austerity (i.e. meanness and fear).

Of course, she still has her fans and loyal supporters and I might even be numbered amongst them, for her books meant a very great deal to me in my youth. But the fact remains that she's now a somewhat less mainstream and thus more marginal figure than she used to be and this is unfortunate, as she is not only a great novelist and teller of tales, but a brilliant journalist and critic.

Her study, The Sadeian Woman, for example, remains one of the best exercises in cultural history and sexual politics produced by an English author and her pieces collected in Nothing Sacred (Virago, 1992) also deserve to be read and re-read; not least of all the essay 'Lorenzo the Closet Queen', which combines two of her great loves and two of my own obsessions, namely, the novels of D. H. Lawrence and the sociology of fashion.

In the above, Carter offers an all-too-brief sartorial critique of Women in Love - a novel which, as she amusingly says, is "as full of clothes as Brown's". She also argues that if Lawrence catalogues the wardrobes of his heroines with such a loving eye for detail, he does so in order to convince his readers that he possesses a "hot line to a woman's heart by the extraordinary sympathy he has for her deepest needs, that is, nice stockings, pretty dresses and submission" [208].

This, she says, is a piece of literary fraudulence. And yet, as she goes on to add, Lawrence at the same time clearly enjoys being a girl and has a genuine and somewhat touching (if pathologically fetishistic) interest in female apparel. Lawrence, she writes, "is seduced and bemused by the narcissistic apparatus of femininity", even if he only wanted to be a woman "so that he could achieve the supreme if schizophrenic pleasure of fucking himself" [209].

As I noted in an earlier post, Lawrence is particularly fascinated in Women in Love by the thought of brightly coloured stockings and they become a kind of leitmotiv running throughout the novel. Carter writes:

The question is, what is Lawrence playing at in this scene of camp ecstasy and girliness? Carter is in no doubt:

"I think what Lawrence is doing is attempting to put down the women he has created in his own image for their excessive reaction to the stockings to which he himself has a very excessive reaction indeed, the deep-down queenly, monstrous old hypocrite that he is." [210]

This seems a bit harsh: but deadly accurate. Lawrence allows himself the "licence to mock the girls for parading about in the grotesque finery he has forced them to don" [211]. He is at once fascinated by female dandyism and the seductive allure of fashion and repulsed by it. If he depicts Gudrun as a kind of whore, then Hermione is turned into a terrifying witch figure by the exotic, aristocratic and self-conscious strangeness of her dress.

Whilst Baudelaire loved women for their unnaturalness, Lawrence hates them for it and many of his female characters end up like drag queens, defined and confined by their own clothing. Carter concludes that for most of the time in Women in Love, Lawrence is like a little boy dressing up in his mother's clothes and attempting to fool us into thinking he writes with the hand (and the eye) of a woman:

"The con trick, the brilliant, the wonderful con trick, the real miracle, is that his version of drag has been widely accepted as the real thing, even by young women who ought to know better. In fact, Lawrence probes as deeply into a woman's heart as the bottom of a hat-box." [214]

Posted by Stephen Alexander at 09:42