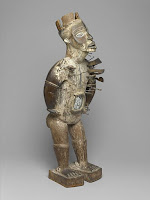 Ninkondi (one of the variant plural forms of nkondi, meaning 'hunter') are fetish objects made by the Kongo people of Central Africa's Congo region. They are intended not merely to offer protection, but to house a powerful spirit that can be enlisted to track down one's enemies, inflicting misfortune or illness upon them.

As can be seen in the above image, a nkondi is usually a carved human figure - though it can sometimes be an animal - with a cavity in the abdomen, into which a medicine man stuffs ingredients thought to have supernatural properties. The figures range in size from small to life-size and are sometimes adorned with feathers.

Nails (or blades) were driven into the figure in order to affirm an oath or curse - or perhaps to activate the spirit within. Controversially, some scholars believe that the native peoples were influenced in this practice by images that Portuguese missionaries carried with them from Europe of Christ nailed to the cross and Saint Sebastian pierced with arrows.

Fascinating as all this is, I have to confess that when it comes to nail fetishes, I'm more interested in the long, sharp fingernails of beautiful young women, than rusty bits of iron banged into a wooden figure for the purposes of witchcraft ...

Whilst fingernail fetish is often framed and discussed within the wider category of hand partialism, I think that it deserves critical attention in its own right. For the nails are not like any other part of the hand in that they are not composed of living material; they are made, rather, of a tough protective protein called alpha-keratin.

D. H. Lawrence describes his fingernails as "ten little weapons between me and an inanimate universe, they cross the mysterious Rubicon between me alive and things [...] which are not alive, in my own sense".

Thus, I think there's something in the claim that what nail (and hair) fetishists are ultimately aroused by is death; that they are, essentially, soft-core necrophiles.* Having said that, the human nail as a keratin structure (known as an unguis) is closely related to the claws and hooves of other animals, so I suppose one could just as legitimately suggest a zoosexual origin to the love of fingernails.

Whilst some readers will best like fingernails in their natural state - i.e., unvarnished and unadorned - I have to express a preference for added colour; preferably red or black. I know there's a wide variety of other colours and shades available, but they don't excite my interest so much. Nor do I care for overly decorative designs and fancy finishes.

Finally, whilst clearly having something in common, I think that amychophilia is quite disinct from onychophilia; the latter is a love of fingernails as things in themselves; the former a love of the pain they can inflict, when grown long and sharp.

In other words, the amorous subject who desires to be violently scratched is a kind of masochist; whilst an onychophile, in the purest sense, would be more aroused by simply observing the following scene, described in fetishistic detail by Daphne du Maurier:

"The Marquise lay on her chaise-longue on the balcony of the hotel. She wore only a wrapper, and her sleek gold hair, newly set in pins, was bound close to her head in a turquoise bandeau that matched her eyes. Beside her chair stood a little table, and on it were three bottles of nail varnish all of a different shade.
She had dabbed a touch of colour on to three separate finger-nails, and now she held her hand in front of her to see the effect. No, the varnish on the thumb was too red, too vivid, giving a heated look to her slim olive hand, almost as if a spot of blood had fallen there from a fresh-cut wound.
In contrast, her fore-finger was a striking pink, and this too seemed to her false, not true to her present mood. It was the elegant rich pink of drawing-rooms, of ball-gowns, of herself standing at some reception, slowly moving to and fro her ostrich feather fan, and in the distance the sound of violins.
The middle finger was touched with a sheen of silk neither crimson nor vermilion, but somehow softer, subtler; the sheen of a peony in bud, not yet opened to the heat of the day but with the dew of the morning upon it still. [...]
Yes, that was the colour. She reached for cotton-wool and wiped away the offending varnish from her other finger-nails, and then slowly, carefully, she dipped the little brush into the chosen varnish and, like an artist, worked with swift, deft strokes.
When she had finished she leant back in her chaise-longue, exhausted, waving her hands before her in the air to let the varnish harden - a strange gesture, like that of a priestess."

* There has been at least one recorded case in which an illicit lover derived pleasure from eating the nail trimmings of corpses (necro-onychophagia), thereby lending support to the theory that nail fetishism has a far darker and more ghoulish undercurrent. See R. E. L. Masters and Eduard Lea, Perverse Crimes in History: Evolving concepts of sadism, lust-murder, and necrophilia - from ancient to modern times (Julian Press, 1963).

The photo on the left at the top of the post is of a 19th-century nkondi figure belonging to the Arts of Africa Collection of the Brooklyn Museum, NY. The photo on the right, is an advertising poster for a nail bar, available to buy on eBay: click here.

Posted by Stephen Alexander at 21:03