Anti-Human Reflections on the Red-Billed Leiothrix 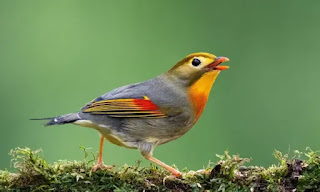 Leiothrix lutea
I.
In a country in which insect numbers have fallen a staggering 65% in the last twenty years and other factors, such as agricultural intensification and habitat destruction, are all making survival increasingly difficult for our feathered friends, it's surprising that any foreign bird species would decide to try its luck and make the move to England.
However, that's just what the red-billed leiothrix - known by some as the Pekin robin or the Japanese nightingale - has decided to do; much to the horror and outrage of those who fear this brightly-coloured subtropical songbird will colonise our gardens, threaten native bird populations, and change the dawn chorus for ever ...
It's a familiar tale: the same people who hate ring-necked parakeets hate these little birds. And they always justify their opposition to the invasive species on the same grounds; namely, a desire to safeguard the survival of native creatures, although they don't seem to have done a very good job of that over the last 50 years, during which time tens of millions of birds have disappeared from our skies.
One might have imagined, therefore, that they would welcome these newcomers, who have been recorded in several parts of the country.
But not so: a tiny number of red-billed leiothrixes spotted in southern England and thought to have escaped from captivity - not flown here directly from China and not known to be successfully breeding - has got them worked up into a frenzy: Non-native species are never a good thing, sometimes they’re neutral, but they're never positive, as one expert put it.
II.
Meanwhile, I heard today on the news that ten thousand human migrants have (illegally) crossed the Channel in small boats and set foot on British shores so far this year (after 28,500 arrived in 2021), ever increasing the UK human population and transforming England into the most overcrowded (and nature-depleted) large nation in Europe.
Personally, I'd like to see far more birds, mammals, reptiles, amphibians, fish, and insects and far fewer people on these islands and would happily support an extensive programme of rewilding and depopulation in order to increase biodiversity. For frankly, the latter isn't going to happen without the former.
Ultimately, I agree with Birkin, there's no thought more beautiful or cleaner than a world empty of people and full of birdsong.
Posted by Stephen Alexander at 14:49