D. H. Lawrence is all the Rage 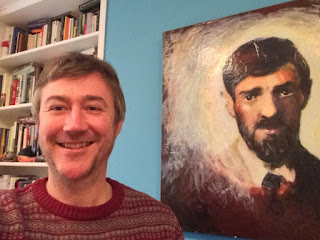 James K. Walker and an outsider art style portrait of DHL
I.
There are not many joyous events to look forward to in November: All Souls' Day, Bonfire Night, and Katxu's birthday - that's really about it. However, I'm pleased to announce an addition to this short list; a presentation by bibliophile and promiscuous homotextual James Walker to the D. H. Lawrence London Group [1].
James - a teacher, writer, and critic who describes himself as a digital storyteller - has assembled two major projects of note in collaboration with Paul Fillingham: The Sillitoe Trail (2012-13), which explored the enduring relevance of Saturday Night and Sunday Morning; and Dawn of the Unread (2014-16), a graphic novel celebrating Nottingham's literary heritage.
He is currently working on a transmedia project that will digitally recreate D. H. Lawrence's savage pilgrimage. It's this project - which James likes to describe as a Memory Theatre - which he'll be discussing in November, with particular reference to the subject of rage within the life and work of Lawrence.
This obviously excites my interest, as I've recently been researching the ancient Greek concept of thymos (anger) which Plato named as one of the three constituent parts of the human psyche; the others being logos (reason) and eros (sexual desire) and which Peter Sloterdijk locates as central within Western history, arguing that an active form of this emotion - i.e., free of ressentiment - might actually be something vital and productive.
And so, without wishing to anticipate in too great a detail what James might be planning to say, here are a few thoughts on Lawrence and rage that I'm hoping he'll develop ...
II.
James isn't, of course, the first to have noticed (and been amused by) Lawrence's semi-permanent fury with himself, with others, and with the world at large.
Geoff Dyer, for example, picked up on this in his study of Lawrence entitled Out of Sheer Rage (1997) and, twelve years prior, Anthony Burgess had offered his own passionate appreciation of Lawrence in an episode of The South Bank Show which aired on 20 January 1985 under the title 'The Rage of D. H. Lawrence' [2].
I don't know why Lawrence was so often so angry; some commentators have suggested it was symptomatic of his TB [3]; others take a more psychological approach and discuss Lawrence and his work in terms of behavioural disorders such as social anxiety disorder and intermittant explosive disorder.
Again, I have no idea if Lawrence was bipolar, although he did seem to swing from periods of depression to periods marked by an abnormally elevated mood - but then, who doesn't?
And it's important to note that Lawrence - perhaps aware of his own public image - often played up his anger for comic effect, as in the famous letter to Edward Garnett in which he curses his critics and fellow countrymen:
"Curse the blasted, jelly-boned swines, the slimy, the belly-wriggling invertebrates, the miserable sodding rotters, the flaming sods, the snivelling, dribbling, dithering palsied pulse-less lot that make up England today. They've got white of egg in their veins, and their spunk is that watery it's a marvel they can breed. They can but frog-spawn - the gibberers! God, how I hate them! God curse them, funkers. God blast them, wish-wash. Exterminate them, slime." [4]
Only someone with no sense of humour would mistake this for genuine anger; it's Lawrence doing what writers love to do most, i.e., play with words.
Having said that, I think we can characterise even Lady Chatterley's Lover as a thymotic text and not simply an erotic novel or piece of romantic fiction. It's as much about Mellors raging against the class system, industrial capitalism, modern technology, poaching cats, crying children, ex-wives and girlfriends, lesbians, and contemporary art, as it is about Connie's sexual awakening.
And I think we should also mention that there were occasions when Lawrence's rage was genuine and took a nasty, violent turn. I'm sure James will refer to the verbal and physical abuse suffered by Lawrence's wife Frieda, for example, and the incident involving poor Bibbles the dog (readers who would like reminding of these things can go to a post on the subject by clicking here).
III.
Anger is an energy, as John Lydon once sang [5]. And, as a matter of fact, he's right; those experiencing rage have high levels of adrenaline and this increases physical strength and sharpens senses, whilst also inhibiting the sensation of pain.
Rage, in other words, enables individuals to do things that they might otherwise be incapable of (and if you don't believe me or Rotten, ask Dr. Bruce Banner).
And with that, it's over to you James ...
Notes
[1]  James Walker's presentation to the Lawrence London Group is via Zoom on 26 November 2020, between 6.30 and 8.30 pm local time. For further details of the event and for information on the DHL London Group, visit Catherine Brown's website by clicking here.
[2] Readers who are interested in watching this episode of The South Bank Show [S08/E11] can find it on YouTube in four parts: click here for part 1.
[3] Katherine Mansfield, who was herself consumptive and "subject to outbursts of uncontrollable rage", also believed this. See David Ellis, Death and the Author, (Oxford University Press, 2008) p. 15.
[4] D. H. Lawrence, letter to Edward Garnett, dated 3 July 1912, in The Letters of D. H. Lawrence, Vol. I, ed. James T. Boulton, (Cambridge University Press, 1979), pp.420-22. Lines quoted are on p. 422.
[5] Play 'Rise', by Public Image Ltd., a single release from the album Album (Virgin Records, 1986), by clicking here.
Posted by Stephen Alexander at 18:25