Above all Things Encourage a Straight Backbone 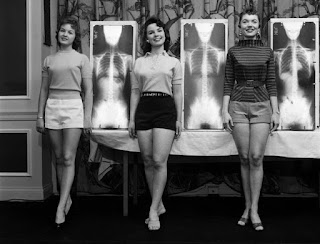 Winners of Miss Correct Posture - aka Miss Beautiful Spine
(Chicago, May 1956) [1]
Deleuze - and those influenced by his work (particularly the books written in collaboration with Félix Guattari) - often thrill to the idea (borrowed from Artaud) of a body without organs. And they seem equally excited at the thought of heads without faces and backs without vertebrae.
For if the face is a universal mask and machine of moral overcoding which makes pale-faced Christians of us all, then "the spinal column is nothing but a sword beneath the skin, slipped into the body of an innocent sleeper by an executioner" [2].
Perhaps that's why there's a radical tradition of associating bones with fascism and privileging the soft pathology of the flesh as somehow more vital - something I touched on briefly in a recent post: click here.
It's a tradition that one might have expected D. H. Lawrence to have belonged to; for Lawrence certainly celebrated the flesh as opposed to the spirit - and the latter, as Hegel famously declared, is a bone.
However, it turns out that Lawrence is all in favour of back bone, particularly the lumbar ganglion which, he says, negatively polarizes the solar plexus in the primal psyche [4] and is the centre of all independent activity (or what we might term a will to separation).
Lawrence encourages children to stiffen their little backs and escape the influence of their mothers; to kick themselves into singular being full of pride and the joy of self-assertion; to know that they are themselves and distinct from all others. He writes:
"From the great voluntary ganglion of the lower plane, the child is self-willed, independent, and masterful. In the activity of this centre a boy refuses to be kissed and pawed about, maintaining his proud independence like a little wild animal. From this centre he likes to command and to receive obedience. From this centre likewise he may be destructive and defiant and reckless, determined to have his own way at any cost." [5]
Obviously, those who despise these spinal characteristics, interpret them as signs of fascist or phallocratic imperialism.
But, as Lawrence would say, curse the blasted, jelly-boned swines and slimy, belly-wriggling invertebrates [5] who slander those who dare to stand upright, with shoulders back, taking pleasure in their own sovereign power.
Notes
[1] In the 1950s and '60s, American chiropractors decided to stage a number of beauty contests in the hope that this would help legitimise their profession and raise their public profile. The photo reproduced here shows the winner and runners up of one such contest held in Chicago, May 1956. According to a newspaper report at the time, the girls were picked for their beauty and perfect posture. For more details and more images, click here.
[2] Gilles Deleuze, Francis Bacon: the logic of sensation, trans. Daniel W. Smith, (Continuum, 2003), p. 23. Like many of his ideas and phrases, Deleuze is borrowing this from a writer of fiction; in this case, Franz Kafka. See: 'The Sword', in Diaries 1914-1923, ed. Max Brod, trans. Martin Greenberg with Hannah Arendt (Schocken Books, 1949), pp. 109-10.
[3] Lawrence borrows many of the ideas and terminology used in Psychoanalysis and the Unconscious (1921) and Fantasia of the Unconscious (1922) from theosophy rather than physiology and when he does use anatomical terms they only approximate with scientific and medical knowledge.
[4] D. H. Lawrence, Fantasia of the Unconscious, ed. Bruce Steele, (Cambridge University Press, 2004), p. 89.
[5] I'm paraprasing from Lawrence's famous letter written to Edward Garnett on 3 July 1912. See The Letters of D. H. Lawrence, Vol. I, ed. James T. Boulton, (Cambridge University Press, 1979), p. 422.
This post grew out of correspondence with the artist Heide Hatry and I am grateful as always for her inspiration.
Posted by Stephen Alexander at 07:45