As for Lawrence ... He's a Moral Conservative 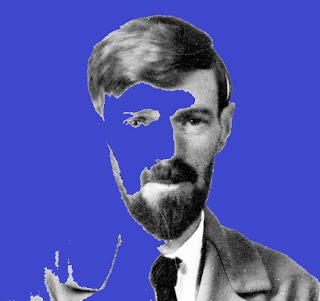 Perhaps one of the most surprising - and, for some, disappointing - things that D. H. Lawrence ever wrote is found in the Foreword to Fantasia of the Unconscious (1922):
"On the whole, our important moral standards are, in my opinion, quite sound [...] In its essential character, our present morality seems to me to offer no very serious obstacle to our living: our moral standards need brightening up a little, not shattering." [1]
Tell that to the followers of Nietzsche, for example, who call for a revaluation of all values ...! Indeed, this might almost be read as an explicit rejection of Zarathustra, who famously advocates the breaking of law tables [2].
Of course, as digital pilgrim James Walker reminds us, Lawrence was a mass of contradictions - elsewhere in his work he explicitly rejects the idea of standards of any kind - and so maybe we shouldn't take what he says in Fantasia too seriously after all ...? [3]
It could be, for example, that Lawrence was simply being contrary in the face of one critic who suggests that he seeks a "'revision of moral standards such as will remove artificial bars to the escape of each person from the isolation which is his most intolerable hardship'" [4].
That would explain why - again to one's bemusement - Lawrence even challenges the idea that isolation is an intolerable form of hardship for the individual. And yet, it's precisely such solitary confinement - leading ultimately to self-enclosure or solipsism - that Lawrence elsewhere rages against:
"For it is only when we can get a man to fall back into his true relation to other men, and to women, that we can give him an opportunity to be himself. So long as men are inwardly dominated by their own isolation [...] nothing is possible but insanity more or less pronounced. Men must get back into touch." [5]
If it isn't his contrary nature that explains this surprising defence of the present moral order, then, I suppose, we might just have to consider the possibility that Lawrence was fundamentally more conventional and conservative than many of his readers like to believe [6]; thus his support for traditional marriage, capital punishment, and the censorship of pornography.
And thus his contempt for those writers and artists who wore jazz underwear and didn't subscribe to his central teaching that the "essential function of art is moral." [7]
Notes
[1] D. H. Lawrence, Fantasia of the Unconscious, ed. Bruce Steele, (Cambridge University Press, 2004), p. 60.
[2] The line I'm thinking of is found in Zarathustra's Prologue (9) and is translated by Adrian Del Caro as: "'Look at the good and the just! Whom do they hate most? The one who breaks their tablets of values, the breaker, the lawbreaker - but he is the creative one.'"
See the Cambridge University Press edition of Nietzsche's Thus Spoke Zarathustra (2006), ed. Adrian Del Caro and Robert B. Pippin. The line quoted is on p. 14.
[3] See the related post to this one - As for Lawrence ... A Reply to James Walker - click here.
[4] L. L. Buermyer, writing in the New York Evening Post Literary Review (16 July 1921), quoted by Lawrence in Fantasia, p. 60.
[5] D. H. Lawrence, 'Review of The Social Basis of Consciousness, by Trigant Burrow', in Introductions and Reviews, ed. N. H. Reeve and John Worthen, (Cambridge University Press, 2005), p. 336.
It's worth noting that whilst Lawrence says there's no need to shatter moral standards, he does argue here for the shattering of the ideal of a standardised (or normalised) humanity.
[6] This might help explain why Lawrence is increasingly popular in conservative (and even neo-reactionary) circles; see for example Micah Mattix, 'Reconsidering D. H. Lawrence', The American Conservative, (9 Oct 2020): click here.
[7] D. H. Lawrence, 'Whitman', Studies in Classic American Literature, ed. Ezra Greenspan, Lindeth Vasey and John Worthen, (Cambridge University Press, 2003), p. 155.
See also the essay 'Art and Morality' in Study of Thomas Hardy and Other Essays, ed. Bruce Steele, (Cambridge University Press, 1985), pp. 161- 168, which opens: "It is part of the common clap-trap, that 'art is immoral.'" In this short text, Lawrence expresses his loathing for those artists whose only aim was to épater les bourgeoisie.
Posted by Stephen Alexander at 11:47