As for Lawrence ... A Reply to James Walker 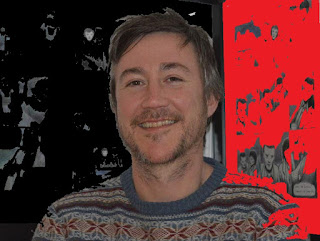 James Walker: Senior Lecturer School of Arts and Humanities
Nottingham Trent University: full profile click here.
I.
As torpedophiles will be aware, digital storyteller James Walker is someone I have a fair degree of time for, even if his political views often strike me as all-too-predictably prim and proper.
His graphic novel (co-produced with Paul Fillingham), Dawn of the Unread (2014-16), which celebrates Nottingham's literary heritage, was amusing and his current transmedia project which aims to build an online Memory Theatre inspired by D. H. Lawrence's global wanderings, also promises to be of interest.
A member of the D. H. Lawrence Society Council, Walker assembles and edits a monthly bulletin that is emailed to members of the Society, thereby demonstrating his commitment to circulating all the latest news of Lawrence, but without becoming an uncritical follower of the latter.
Indeed, Walker often seems to regard Lawrence primarily as a figure of fun, rather than as a novelist and poet who might actually have something important to teach us. This helps explain his remark left in a comment to a recent post published here on Torpedo the Ark:
"As for Lawrence, he's a mass of contradictions who needs to be read in context. I wouldn't take quotes from Fantasia too seriously, although at least he was honest enough to call it what it was: this 'pseudo-philosophy of mine'."
It's a remark I thought we might examine a little more closely ...
II.
Firstly, it's true that Lawrence is a mass of contradictions and that there is little point in searching for a coherent or consistent philosophy in his work. Like Nietzsche, Lawrence makes no attempt to systematise his ideas - something which betrays a lack of integrity according to the former. However, he does offer a very distinctive style which is characterised by plurality, difference, and insouciance.
In other words, it's a style that enrages the puritan who not only expects but demands logical seriousness and dependability.
Arguably, Lawrence anticipates the figure imagined by Roland Barthes who "abolishes within himself all barriers, all classes, all exclusions, not by syncretism but by simple disregard of that old spectre: logical contradiction" [1]; that anti-Socratic hero who mixes every language and endures the mockery of moral-rational society without shame.
For me, this is one of Lawrence's strengths and at the heart of his appeal; but do I sense a trace of disappointment and/or irritation in Walker's As for Lawrence remark? Does he secretly hope that by reading Lawrence in context - something he says needs to be done, although he doesn't specify what constitutes this context - his work might not only be better understood but, as it were, coordinated within a wider framework of meaning which is clear, coherent, and woven into Truth?
Secondly, one might wonder just how seriously Walker would have us take Lawrence's work in Fantasia of the Unconscious (1922). Not too seriously, he says, but what exactly does that mean; who determines what is and is not a serious piece of writing and what is and is not an appropriate reader response?
Again, I might be mistaken, but I get the impression that Walker secretly thinks Lawrence a clown and his work ludicrous. I also suspect he thinks Lawrence something of a fraud. This is why he is quick to remind us of Lawrence's own use of the phrase pseudo-philosophy to describe his thinking in Fantasia. And why he commends Lawrence for his honesty here, as if elsewhere in the book he is flagrantly dishonest and peddling falsehoods.
The ironic thing is that Lawrence's pseudo-philosophy remark is one that is usefully read within a wider context; namely, the Foreword to Fantasia in which Lawence amusingly answers his critics, including Mr. John V. A. Weaver of the Brooklyn Daily Eagle, who reviewed Psychoanalysis of the Unconscious and coined the term Pollyanalystic which Lawrence then rewrote as pollyanalytics in order to describe his own philosophy.
Read within this context, it becomes clear that Lawrence neither regards his own thinking as a pseudo-philosophy nor a "wordy mass of revolting nonsense" [2]. He is using this phrase - as he's using pollyanalytics - in an ironic (rather weary) manner in the face of past criticism and anticipated future criticism.
It also becomes clear that Lawrence takes his philosophical inferences - deduced from the novels and poems -  seriously and he challenges his readers to do so also if they wish to fully understand his work. For Lawrence, underlying all art is a philosophy upon which it is utterly dependent:
"The metaphysic or philosophy may not be anywhere very accurately stated" [3] - it may contain a mass of contradictions or be wearing woefully thin - but it is of primary importance and not to be scornfully dismissed as something unworthy of serious consideration.
Notes
[1] Roland Barthes, The Pleasure of the Text, trans. Richard Miller, (Basil Blackwell, 1990), p. 3.
[2] D. H. Lawrence, Fantasia of the Unconscious, ed. Bruce Steele, (Cambridge University Press, 2004), p. 62.
[3] Ibid., p. 65.
For a follow-up post to this one - in which it seems James Walker might have a point after all and we examine Lawrence's moral conservativism - click here.
Posted by Stephen Alexander at 10:18