Reflections on Madam Butterfly 2: Puccini's Influence on Pop and Fashion 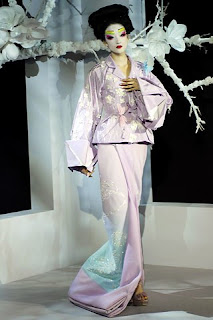 Taken from the album Fans (1984), the single 'Madam Butterfly' is a perfect fusion of opera and electronic beats, performed by Betty Anne White and Debbie Cole, with the added bonus of having Malcolm McLaren in the role of Lt. Pinkerton.

It's a kind of punk version of Hooked on Classics, which sounds as if it really shouldn't work, yet somehow does work - and works in a way that even Puccini would have approved of, belonging as it does to the post-Romantic tradition of verismo that he favoured (a form of realism that often deals with violent and sexual themes, but in a seductively beautiful manner).

I once conducted an informal interview with Malcolm in which I asked him about his fascination with opera and particularly the work of Puccini. He explained that, for him, what appealed most was the intensity of feeling and the authenticity of emotion expressed. Opera was the very opposite of what he later termed karaoke culture. It was this sincerity of expression that opera and punk rock shared that made them so powerful.

II. Cio-Cio San on the Catwalk

John Galliano may say terrible things when drunk, but he remains one of the undisputed geniuses of British fashion who, during a fourteen year period as artistic director at Dior, ruled Paris and the world. In 2007, celebrating his tenth year at the company, he presented a spring/summer couture collection called Japanese New Look, inspired by Puccini's legendary opera, Madama Butterfly.

The collection featured an elegant, yet bold use of colour that mixed and matched gentle cream tones with bright yellows, lime greens, and hot pinks. The tailoring, of course, was impeccable (as was the geometric detailing). Stephen Jones designed the extraordinary headpieces (think bonsai trees and cherry blossom), whilst Pat McGrath produced showstopping makeup that suggested a contemporary geisha look (or a rather punkish Cio-Cio San).

I mentioned in a sister post to this one discussing Puccini's musical masterpiece, that there are some people now who find the opera problematic on woke political grounds ...

Doubtless, these same people would also object to Galliano's 2007 collection due to its cultural appropriation and his use of mostly white models, although it should be noted that the Japanese model Ai Tominaga, pictured above, happily participated in the Paris show, as did the Chinese model Emma Pei (below), who took to the catwalk to the sound of Malcolm McLaren's unique take on Madam Butterfly ... 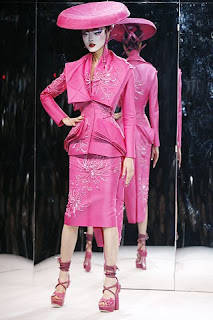 My taped interview with McLaren has been transcribed, edited, and posted on Torpedo the Ark: click here.

Or click here for the promotional video to the above, directed by Terence Donovan. Set in a Turkish bath and featuring a languid parade of beautiful young women, the video was banned by Top of the Pops on the grounds that the artist - McLaren - fails to appear in it.

Posted by Stephen Alexander at 16:03 No comments: