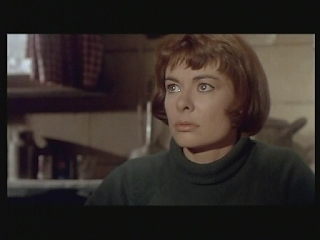 Nellie March is an interesting character: I'm not sure it's accurate to describe her as a dyke, but she's definitely a bit more robust and mannish than her intimate friend Miss Banford, who was a "small, thin, delicate thing with spectacles" [7] and tiny iron breasts.

Unsuprisingly, therefore, it's March who does most of the physical work on the small farm where she and Banford live. And when she hammered away at her carpenter's bench or was "out and about, in her puttees and breeches, her belted coat and her loose cap, she looked almost like some graceful, loose-balanced young man" [8].

It's interesting to consider this: that outward appearance plays such an important role in the construction of gender; that clothes maketh the man, even when that man happens to be a woman.

For all his essentialism, Lawrence is acutely aware of this. Which helps explain why he frequently gives detailed descriptions of what his characters are wearing and seems to have an almost fetishistic fascination with both male and female fashion. In the Lawrentian universe, looks matter and the question of style is crucial.

It also explains why later in the story, when March has decided to affirm a heterosexual identity and give her hand in marriage to a foxy young Cornishman named Henry, she undergoes a radical change of image. All of a sudden the heavy work boots and trousers are off and she's slipping into something a little more comfortable, a little more feminine, and she literally lets down her thick, black hair.

Henry, who has been dreaming of her soft woman's breasts beneath her tunic and big-belted coat, is astonished by her transformation:

"To his amazement March was dressed in a dress of dull, green silk crape [...] He sat down [...] unable to take his eyes off her. Her dress was a perfectly simple slip of bluey-green crape, with a line of gold stitching round the top and round the sleeves, which came to the elbow. It was cut just plain, and round at the top, and showed her white soft throat. [...] But he looked her up and down, up and down." [48]

"As she crouched on the hearth with her green slip about her, the boy stared more wide-eyed than ever. Through the crape her woman's form seemed soft and womanly. And when she stood up and walked he saw her legs move soft within her moderately short skirt. She had on black silk stockings and small, patent shoes with little gold buckles.
She was another being. She was something quite different. Seeing her always in the hard-cloth breeches, wide on the hips, buttoned on the knee, srong as armour, and in the brown puttees and thick boots, it had never occurred to him that she had a woman's legs and feet." [49]

Not only is March born as a woman thanks to putting on a pair of black silk stockings and a (moderately) short skirt, but Henry too feels himself reinforced in his phallic masculinity:

"Now it came upon him. She had a woman's soft, skirted legs, and she was accessible. He blushed to the roots of his hair [...] and strangely, suddenly felt a man, no longer a youth. He felt a man, with all a man's grave weight of responsibility. A curious quietness and gravity came over his soul. He felt a man, quiet, with a little heaviness of male destiny upon him." [49]

It's writing like this that sets Lawrence apart, I think; writing that will seem pervy and sexist to some, but full of queer insight to others. Writing that, in a sense, undermines his own essentialism by showing the importance of costume and perfomativity when it comes to gender roles, sexual identity, and sexual attraction.

And does it end well once they are married, Henry and Nellie? A 20-year old youth and a 30-year old woman used to living an independent life (and sharing a bed with another woman)? Not really: something was missing.

But March, of course, doesn't want to submit; she wants to stay awake, and to know, and decide, and remain an independent woman to the last.

So it's hard to believe they're going to find happiness. But then, as Lawrence writes:

"The more you reach after the fatal flower of happiness, which trembles so blue and lovely in a crevice just beyond your grasp, the more fearfully you become aware of the ghastly and awful gulf of the precipice below you, into which you will inevitably plunge, as into the bottomless pit [...]
That is the whole history of the search for happiness, whether it be your own or somebody else's [...] It ends, and it always ends, in the ghastly sense of the bottomless nothingness into which you will inevitably fall [...]" [69]

And on that note, Happy New Year to all torpedophiles ...

See: D. H. Lawrence, 'The Fox', in The Fox, The Captain's Doll, The Ladybird, ed. Dieter Mehl, (Cambridge University Press, 1992). All page numbers given in the text refer to this edition.

Posted by Stephen Alexander at 08:19 No comments: 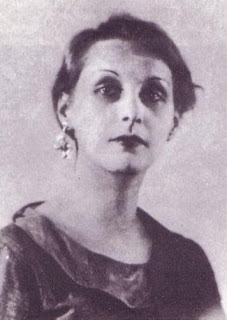 Henry Miller's posthumously published novel Crazy Cock, was originally entitled Lovely Lesbians - this with reference to his beautiful second wife, June, and her lover, the somewhat mysterious figure of Jean Kronski, fictionally portrayed by Miller in the above work as the arts-loving and rather dapper dyke, Vanya.

Miller met June in 1923, when she was still only 21 and working as a dancer in New York. He immediately fell in love and abandoned his first wife and child in order to be with her. They married in the summer of the following year and their relationship is central to much of his work, including the two Tropic books and his semi-autobiographical trilogy, The Rosy Crucifixion.

In October 1926, at June's insistence, Jean moved in with them. This allowed her to cultivate an intensely close relationship with the latter and she seemed to enjoy Jean's affections more than her husband's, much to Miller's chagrin. Not surprisingly, things soon came to a head and in April 1927 June and Jean left for Paris together.

Unfortunately, things didn't work out very well for the lovely lesbians and June returned to her old life with Miller in New York just three months later. As for Jean Kronski - if that was in fact her name - she is thought to have committed suicide in an insane asylum c.1930.

Now, I'm no expert on Miller, so I don't really know what he meant by the phrase lovely lesbians - one suspects he was using it in a sardonic manner, as I can't imagine he was entirely happy about the affair between his wife and Miss Kronski (though, that said, he didn't seem to mind later sharing June with Anaïs Nin, who was as sexually and creatively obsessed with her as Miller himself) - but it appeals very much because, for me, there is always something lovely about lesbians, wherever they are on the Sapphic spectrum; from the most feminine of lipstick lesbians, to the most butch or bullish of dykes.
Does saying this make me a malesbian perchance? Not really. For this is a problematic term, for several reasons. Let's just say it demonstrates that I'm very much oriented towards women, feel happier in their company than in the company of men, and that Torpedo the Ark is an openly feminist blog which shares the view subscribed to by American poet and activist Audre Lorde that feminism fundamentally emerges out of a lesbian consciousness, whether or not one actually sleeps with women.

Posted by Stephen Alexander at 14:33 No comments:

In Praise of Sapphic Decadence 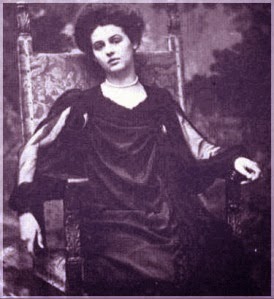 The perverse lesbian was a central figure within decadent literature. An object of endless fascination for writers such as Baudelaire and Swinburne, she might almost be thought of as nothing other than a figure of the male porno-poetic imagination; i.e., a creature of artifice and obscenity shaped by and within desire on the one hand and fear and loathing on the other.

But perhaps she appears most beautifully - and most controversially - in the work of expatriate English poet and female dandy-bohemian Renée Vivien.

In Vivien's text, if the lesbian remains a species of fleur du mal very much marked by the misogyny and homophobia that runs through the work of the above male authors, she is, at the same time, radically and paradoxically reconfigured through "a utopian politics of Sapphic revival" and in this way provides a more affirmative and naturalistic (though no less fictional) conception of liberated female sexuality. In other words, "Vivien's decadent Sapphist is a shimmering, negative embodiment of the utopian possibility contained within a modern world in decline".
- See Elisa Glick, Materializing Queer Desire, (SUNY Press, 2009), p. 12.

This negative dialectics which finds value - even hope - in decadence will remind some readers of Adorno and others of Nietzsche. The point is that sickness, corruption, and perversity often serve to advance us as a species and a culture; that we need our decadent individuals (including alcoholic, anorexic, suicidal, sadomasochistic, lesbian poets like Renée Vivien) and not merely those healthy-living normal types who eat breakfast, go to the gym, work hard and preserve the status quo.

Posted by Stephen Alexander at 17:34 No comments:

There's an astonishing exchange in Chapter XIV of Lawrence's Lady Chatterley's Lover, in which Mellors reveals to Connie the short and unhappy history of his relationships with women, beginning with a schoolmaster's daughter who was pretty and romantic, but sexless; and ending with Bertha Coutts, his wife, who enjoyed sex, but could only achieve orgasm by grinding her own coffee.

Mellors is contemptuous of the first type; the idealistic women who love everything about love, except  fucking. But it is the latter type whom he really hates and seems to fear; the active type like Bertha, that like to bring themselves off by wriggling and shouting and clutching at themselves. These women, says Mellors, who dare to seek clitoral stimulation and require more than vaginal penetration by the penis in order to come, are mostly lesbian:

"'And do you mind?' asked Connie.
'I could kill them. When I'm with a woman who's really lesbian, I fairly howl in my soul, wanting to kill her.'
'But do you think lesbian women are any worse than homosexual men?'
'I do! Because I've suffered more from them. In the abstract, I've no idea. When I get with a lesbian woman, whether she knows she's one or not, I see red.'"

This passage - one that has long troubled and rightly angered many female readers and critics of Lawrence - demonstrates why we are justified in using the term lesbophobia as something distinct from the more commonly theorized phenomenon of homophobia.

Clearly, there is an added component of sexism in lesbophobia and, indeed, a violent element of misogyny. I think the only admirable thing about this passage is that it doesn't seek to disguise the latter. Rather, it explicitly demonstrates how quickly misogyny turns murderous.

Sadly - shamefully - lesbophobia seems to be something that is increasing in our society; or, at any rate, something that it is increasingly OK to articulate. The fact that many gay men and straight women are also guilty of directing abuse or acting in a prejudicial and discriminatory manner towards lesbians is doubly sad and shameful.

Thankfully, this is not Southern Africa and we do not witness the horror of corrective rape in the UK. But such vile hate crime flourishes when good people do and say nothing. Or when writers and intellectuals who should know better, appear to aggressively enforce heteronormative values and condone the gang rape and murder of women who don't wish to submit to male sexual power and phallic authority (women who want none of that).

Posted by Stephen Alexander at 17:33 No comments: