Say No to Female Genital Mutilation 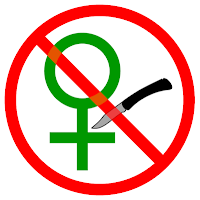 Although some aspects of Mary Daly's work are problematic, I think she's fully justified in identifying female genital mutilation (along with other practices which serve to inscribe patriarchal values upon the body) as a re-enactment of goddess murder, or a symbolic form of gynocide.

This deeply depressing form of religious and cultural cruelty is still inflicted on large numbers of girls and young women throughout the world and, whilst it can take several forms, it's essentially a violent attempt to construct a model of passive female sexuality founded upon the deadening or destruction of the clitoris.

Why? Because the clitoris is understood to be an impure organ that not only lacks any reproductive function, but doesn't serve male purposes either. In fact, the clitoris exists exclusively as an organ of female pleasure and empowerment and so might be regarded as a challenge to the authority of the phallus. And clearly, that can't be allowed.

But before we congratulate ourselves in the West for our more sophisticated thinking on the subject, we should remember that psychoanalysis also views female sexuality as infantile and polymorphously perverse; i.e., as something that refuses to circulate within designated coordinates and so remains disconcerting, if not actually threatening. Freud too - like the witch doctor - wanted to centre everything in the vagina, regarded as an absence awaiting to be filled by any available prick.

And we might also mention the contemporary phenomenon of plastic surgery, which offers labia trimming, vaginal reshaping, and even hymen reconstruction. The clinics carrying out such procedures may speak about improving the look, feel, and function of female genitalia and pretend that such procedures are all about boosting a woman's confidence and self-esteem, but everyone knows that this manifestation of pornographic idealism is all about enhancing male pleasure, making money, and making women feel ashamed of their own bodies.

Ultimately, whether it's done with a rusty razor blade, or the latest laser technology, female genital mutilation is a form of sex abuse.

Posted by Stephen Alexander at 09:42 No comments:

In Memory of Valerie Solanas 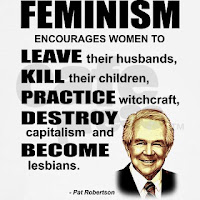 Mary Daly was right to say that anti-feminism is merely the political expression of misogyny. And doubtless the above is intended as a piece of anti-feminist polemic, although, ironically, it echoes the writings of Valerie Solanas fighting her one woman war against male power in the SCUM Manifesto.

Could it be that Pat Robertson is secretly part of the Men's Auxiliary, working diligently to undermine the credibility and authority of his own type? Sadly, probably not.

But it's because of pricks like him that I support all women who desire to happily idle away their time in ways of their own choosing (including infidelity, infanticide, paganism, socialism, and lesbianism); women who know that sometimes you have to scream to be heard - and sometimes you just have to pull the trigger.

Posted by Stephen Alexander at 15:10 No comments: