Bigging Up the Gibson Girl 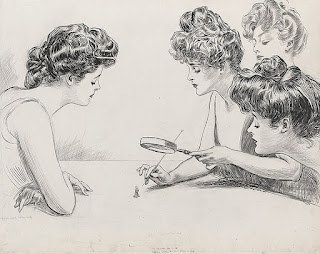 Although - like many Englishmen - I have a great fondness for American women, I was never particularly excited by those turn-of-the-century beauties given us by the illustrator Charles Dana Gibson.

That is to say, Gibson's Edwardian ideal of femininity - combining slightly old-fashioned or straight-laced elements with more modern aspects - is not really my ideal. I like the slender, youthful features and the way her elegant neck is exposed thanks to the pinned-up (pompadour) hairstyle, but I'm not so keen on the fullness of figure and overly fussy fashions.

From the perspective of sexual politics, the Gibson Girl also leaves something to be desired; she was not quite new enough to be considered a New Woman and didn't fully share the latter's progressive vision of social and political change.

Thus, whilst she may have enjoyed some of the freedoms that the New Woman had campaigned for, she didn't seem to threaten the phallocratic order or wish to usurp traditionally masculine roles. Nor was she about to chain herself to any railings; the Gibson Girl was many things, but a militant suffragette she was not. Ultimately, she enjoyed her privileged life in a Gilded Age.

There is, however, one aspect of the Gibson Girl that does fascinate; she was sometimes depicted not as a traditionally passive paradigm of womanhood, but, rather, as a sexually dominant and teasing figure who enjoyed humiliating her lovers and making men feel small as she cheerfully crushed them underfoot, or, as we see in the image above, closely examined them in every detail as if they were some kind of inferior specimen or human insect.

Whether this tells us something about the wilfulness of American women, or Gibson's own perviness, I don't know. But this little-commented upon theme of macrophilia identifiable in his work is surely worthy of further research by those interested either in the history of American illustration or the history of fetishism (or both).

"[Macrophiles] are playing out some old, unresolved psychological issue. Maybe as a child they felt overwhelmed by a dominant mother, or a sadsitic mother. Maybe they were abused. [Macrophilia] is not so much a fetish as a disassociation from reality. It's part of an internal world. The macro's submersion in fantasy serves as a substitute for a more normalized approach to sex. Healthy sexuality is about personal intimacy. It's about feeling good about yourself in a way that expresses caring, and feeling a connection to another person."

This is so laughably ludicrous - almost beyond parody - that I don't even know where or how to begin to refute it. So I'll end the post here and leave this to others, such as Dr. Mark Griffiths, to do; someone who has an altogether more sympathetic and sane understanding of this and other paraphilias.

This post was inspired by - and is dedicated to - Miss Shirin Altsohn (aka Shirinatra), the vintage lifestyle model who knows how to nail the Gibson Girl look to a T: click here.