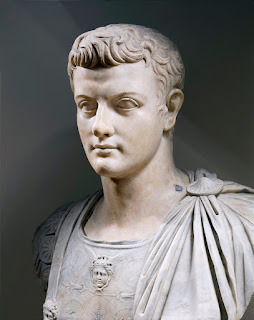 
I have existed from the dawn of the world and I shall exist until the last star falls from the night sky.
Although I have taken the form of a man, I am no man and every man and therefore a god.

Although as a rule I'm not interested in sadistic megalomaniacs, I'm prepared to make an exception in the case of the Roman Emperor Gaius Julius Caesar - or, as he is more commonly known, Caligula (a childhood nickname meaning little boots that, not unreasonably, he came to hate).

For not only was he young, good looking and charismatic, but he also had a sense of humour that revealed a profound sense of the Absurd and it's this, arguably, along with his showmanship, that makes him feel more of a contemporary than his illustrious forebears, or even his nephew Nero.

There are very few surviving firsthand accounts about Caligula's short period of rule - which, if we are to believe a recent documentary, consisted of 1400 Days of Terror* - so we don't really know if he was the cruel tyrant and sexually perverse sociopath he's portrayed in the 1934 novel I, Claudius, written by Robert Graves.

But even if he was, I don't believe he was a madman, so much as a nihilist and ironist (though maybe not of the kind compatible with liberalism that Richard Rorty favours). The above quotation - which could've very easily come from Nietzsche's late work - is a good example of this. I don't think Caligula meant this to be taken literally; that he was self-creating and, indeed, self-mocking, rather than self-delusional.**

It was undoubtedly the absurdist aspect of his reign and his character that attracted the French philosopher and writer Albert Camus to Caligula and, in 1944, he published a four-act play about him in which, following the death of his beloved sister Drusilla, the young emperor attempts to bring the impossible into the realm of the likely and thereby shatter the complacency of Roman life.

For Caligula - as imagined by Camus - the only point or pleasure of having power is to transgress all rational limits that would restrict its exercise and make the heavens themselves up for grabs (the play opens with Caligula desiring to take possession of the moon).

The play was part of what Camus called his Cycle of the Absurd, which also included the novel L’Étranger (1942) and the long essay Le Mythe de Sisyphe (1942). All three works expand upon the idea that man's existence is meaningless because his life lacks external justification. In other words, the Absurd invariably manifests itself when humanity confronts the unreasonable silence of the void.

Discussing his play in 1957, Camus provided a fascinating outline of its theme:

"Caligula, a relatively kind prince so far, realizes on the death of Drusilla, his sister and his mistress, that 'men die and they are not happy.' Therefore, obsessed by the quest for the Absolute and poisoned by contempt and horror, he tries to exercise, through murder and systematic perversion of all values, a freedom which he discovers in the end is no good. He rejects friendship and love, simple human solidarity, good and evil. He takes the word of those around him, he forces them to logic, he levels all around him by force of his refusal and by the rage of destruction which drives his passion for life.
But if his truth is to rebel against fate, his error is to deny men. One cannot destroy without destroying oneself. This is why Caligula depopulates the world around him and, true to his logic, makes arrangements to arm those who will eventually kill him. Caligula is the story of a superior suicide. It is the story of the most human and the most tragic of errors. Unfaithful to man, loyal to himself, Caligula consents to die for having understood that no one can save himself all alone and that one cannot be free in opposition to other men."

Reading this reminds one of why Sartre was right to suggest that existentialism - at least in the French understanding of this term - is a humanism ...

* Caligula: 1400 Days of Terror (2012), written and directed by Bruce Kennedy: click here to watch in full on YouTube

** In other words, whilst it's true that Caligula liked to refer to himself as a living god and insist his senators acknowledge (and worship) him as such, even this was done with atheistic delight and simply provided him with the opportunity to dress up in public as Apollo, Mercury, and, amusingly, Venus.

Posted by Stephen Alexander at 17:35 No comments: 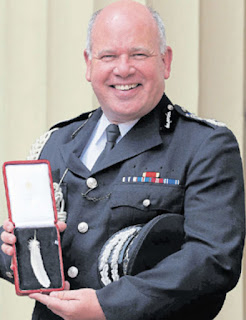 Sir Craig Mackey with the white feather he should receive
when stripped of his knighthood
Image: Press Association

Courage - be it bravery in the face of physical danger or hardship, or the determination to do the right thing even in the teeth of popular opposition - is one of those ancient virtues that still resonates today. One is even tempted to suggest it's a universal human value.

Certainly in the Western philosophical tradition, courage is right up there; Socrates and his followers may have subjected it to questioning and been unable to ever quite arrive at a satisfactory definition of what it is, but they never doubted its importance. The man who would be master of himself must be able to control his fear and endure suffering. And wisdom alone, as Cicero knew, isn't enough here; it also requires the heart's strength.

Even Christian thinkers in the medieval period admired courage - often thought of in terms of fortitude - and listed it as one of the cardinal virtues. Indeed, it was also said to be one of the seven gifts of the Holy Spirit. That said, Aquinas and company tend to see courage in purely reactive terms, as a form of perseverance, rather than as something active, such as bravery in battle.

Later, in the modern era, Hobbes thought of courage as a natural virtue belonging to the individual that assists in his survival. Hume also identified courage as a natural virtue and suggested that it was the one of the sources of human pride and wellbeing. For whilst excessive courage can, perhaps, result in recklessness, it brings the individual the admiration of his fellows (and of posterity) and plays a protective role within society - whereas cowardice, on the other hand, lays us open to attack.

For the existentialists, courage is the affirmation of being in the face of the void and life's absurd cruelty; a way for man to exhibit faith in themselves and grace under pressure, as Hemingway once put it.

Etymologically, the word coward enters into English from the Old French term coart and implies having a tail - as in an individual who turns tail and runs whenever danger threatens, or one who places his tail between his legs like a submissive dog.

Essentially, cowardice is the opposite of courage; a condition wherein fear and/or excessive self-concern stops one from taking decisive action or speaking up and saying the right thing. It is both a failure of nerve and of character and is looked down on as universally as courage is respected. Indeed, it is often not only stigmatized, but severely punished; particularly within a military context that demands every man do his duty and be brave under fire.

And so to the case of Sir Craig Mackey, Deputy Commissioner of the Met ... A man now condemned and widely mocked by colleagues, journalists, and members of the public as a coward, after it was revealed that during the Westminster terror attack last March, in which PC Keith Palmer was fatally stabbed, he drove off, sharpish, having first locked the windows of his car.

To be fair, he was unarmed and had no protective equipment; he also had the safety of his passengers to consider. So maybe he was simply following police protocol. But, having said that, this story is profoundy dispiriting; one expects more from a British Bobby and a knight of the realm (or indeed any Englishman worth his salt).

Posted by Stephen Alexander at 19:52 No comments: 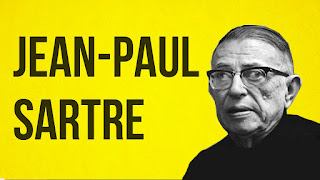 I've never been a great fan of Jean-Paul Sartre and fully endorse Heidegger's repudiation of the Frenchman's attempt to characterize existentialism as a humanism. Mostly though, my dislike of Sartre is an irrational one. Simply put, I've always found him physically repulsive; one wouldn't want to cruise his body, as Barthes would say.

To me, there's something slimy about him - which is ironic, since Sartre offers a controversial account of slime and the danger of all things gooey (including women) towards the end of his most famous and sustained work of philosophy, Being and Nothingness (1943).

Le visqueux, says Sartre, compromises the masculine, non-sticky, sugar-free nature of consciousness or being-for-itself and threatens to submerge the latter in what Camille Paglia memorably describes as "the fleshy muck of the generative matrix" - just like a wasp drowning in the jam.

Slime, in all its base viscosity, affords us neither the reassuring inertia of the solid, nor the liquid dynamism of a fluid. It sticks to us and it sucks us in: it is the feminine revenge of non-conscious being that exists in itself beyond our knowledge of it.

The gynephobic character of this language - and let's not even get started on what he says about holes and the nature of the obscene - would be shocking, were it not so ludicrous and dated. But one can't help wondering what, privately, Simone made of it ...?

In her own writings, she happily adopted Sartre's ontology and seemed to turn a blind eye to his sexism. But what about in the bedroom? One likes to think she might have had a word in his ear about the nature of embodiment and how, whilst a dry soul is best, a moist cunt is the bestest thing of all.

Posted by Stephen Alexander at 12:23 No comments: