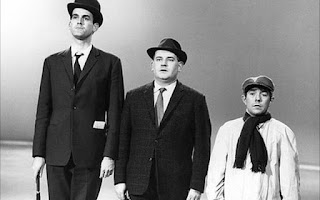 Mssrs. Cleese, Barker, and Corbett in the Class Sketch
Written by Marty Feldman and John Law
The Frost Report (7 April 1966)

If I remember my political theory correctly, then class consciousness refers to an individual's knowledge of their socio-economic status which allows them to judge where their own best interests lie. For Marxists, the hope is that by raising awareness of inequality and injustice, etc., one increases the chances of collective action and, ultimately, revolution.

However, whilst I've always been aware of myself as working class and fully conscious of what that entails - and whilst I've always had a certain level of mistrust for the middle classes - I've never been motivated to join the Labour Party or align myself with those on the far left who long for power and to establish a dictatorship of the proletariat.

In the end, I just don't care enough about even my own interests; certainly not when these are conceived in material terms of ownership. According to my Armenian friend, Vahe, that's because I'm too other-worldly, suffer from a form of false consciousness, don't fully understand the historical process, blah, blah, blah ...

In a short essay written in 1927, D. H. Lawrence argues that the gulf between social classes is very real and very deep, though there are now, he says, only two great classes: middle and working; the aristocratic upper class having entirely been absorbed into the bourgeoisie.

Indeed, notes Lawrence, even the working class share in the aspirations of the middle class; to be successful and to have a lot of money in the bank. However, there remains a very real difference and division which is rooted in feeling and in the politics of touch:

"What is the peculiar repugnance one feels, towards entering the middle class world? [...]
What is the obstacle? I have looked for it in myself, as a clue to this dangerous cleavage between the classes. And I find it is a very deep obstacle. It is in the manner of contact. The contact, among the lower classes [...] is much more immediate, more physical, between man and man, than it ever is among the middle classes. The middle class can be far more intimate, yet never so near to one another. It is the difference between the animal, physical affinity that can govern the lives of men, and the other, the affinity of culture and purpose, which actually does govern the mass today.
But the affinity of culture and purpose that holds the vast middle class world together seems to me to be an intensification today, of the acquisitive and possessive instinct." [39]

Like Lawrence, I was  born among the working class. My father too went down the mines when he left school - though unlike Lawrence's father, he hated it and didn't last long as a collier. After the War, he and my mother - at her instigation - moved south, to London, leaving their old life in the north east of England behind. Eventually, they ended up in Essex in a newly built two-up, two-down council house, where I was born.

My father was employed in a non-managerial position at the Bank of England printing works in Debden. My mother was a traditional housewife, who occasionally did part-time jobs outside the home if money was particularly tight. She had hopes for me and my sister, but nothing too grand or ambitious: some kind of clean office job that paid well. Like the Lawrence household, ours was absolutely working class: tabloid-reading, football-loving, and ITV-watching.

Of course, one is never entirely shaped by or a prisoner to the past, to one's background, to one's class. But one can never quite escape it either. Or - in my case as in Lawrence's - one never really wants to escape and move up in the world, or get on in life. Why? Well, according to Lawrence, it's because this involves too great a cost; one has to sacrifice something vital and vibrate at a different pitch of being, as it were.

For between the classes exists "a peculiar, indefinable difference" that determines the way the heart beats. This might sound like nonsense, but I know exactly what Lawrence means. And I understand entirely why it is he never quite managed (or wanted) to climb up the social ladder, even when offered a helping hand to do so:

"No one was unfriendly. [...] But it was no good. Unless one were by nature a climber, one could not respond in kind. The middle class seemed quite open, quite willing for one to climb into it. And one turned away, ungratefully. [...]
And that I have not got a thousand friends, and a place [...] among the esteemed, is entirely my own fault. The door to 'success' had been held open to me. The social ladder had been put ready for me to climb. I have known all kinds of people, and been treated quite kindly by everyone [...] whom I have known personally.
Yet here I am, nowhere, as it were, and infinitely an outsider. And of my own choice." [37-38]

Precisely: here I am nowhere, with nowhere left to go.

See also 'Myself Revealed' in the above text, pp. 175-81, which is essentially a variant of 'Which Class I Belong To', that concludes: "I cannot make the transfer from my own class into the middle class. I cannot, not for anything in the world, forfeit my passional consciousness and my old blood-affinity with my fellow-men and the animals and the land, for that other thin, spurious mental conceit which is all that is left of the mental consciousness once it has made itself exclusive." [181]

Note: 'Myself Revealed' was included in Assorted Articles (1930) under the title 'Autobiographical Sketch'.

Posted by Stephen Alexander at 08:22 6 comments:

Dandelion: D. H. Lawrence and the Question of Care 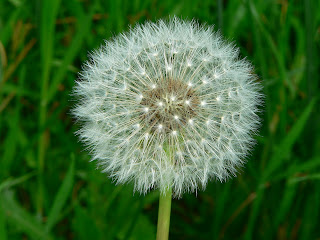 As much as Lawrence may wish to sit like a dandelion on his own stem and concern himself exclusively with those objects existing within his immediate physical environment - refusing to care about abstract issues, faraway places, or unknown peoples - he’s conscious of the fact that such insouciance can lead to parochialism and might easily be mistaken for indifference on his part; something he’d very much regret.

For Lawrence is very keen to sharply differentiate between insouciance and indifference. The former, he says, is a refusal to be made anxious by abstractions, or swept off to into the empty desert spaces inhabited by idealists gripped by a compulsion to care about everything under the sun. The latter, however, Lawrence defines as an inability to care resulting from a certain instinctive-intuitive numbness or nihilism, which, like Nietzsche, he posits as the great malady of the modern age; a consequence of having cared too much about the wrong thing in the immediate past.

The apathetic or indifferent individual, the nihilist, is essentially an exhausted idealist; they have none of the carefree gayness of the insouciant man or woman and do not know how to live on the spot and in the nowness of the actual moment.

That said - and as indicated - insouciance can itself become problematic and serve to isolate the individual, cutting them off from the wider world and from history. We can’t be entirely self-sufficient and concerned only with our own musings and sense impressions. Nor can we only be concerned only about those with whom we have a direct relationship; our immediate family and friends, or kith and kin.

Ultimately, as Lawrence was reluctantly obliged to concede, feeling a sense of solidarity with all mankind isn’t entirely fraudulent and the love of humanity stands for something real and vital; "that feeling of being at one with the struggling soul, or spirit or whatever it is, of our fellow men". Lawrence continues:

"This caring about the wrongs of unseen people has been rather undone. Nevertheless ... still, away in some depth of us, we know that we are connected vitally, if remotely ... [and] we dimly realise that mankind is one, almost one flesh. It is an abstraction, but it is also a physical fact. In some way or other, the cotton workers of Carolina, or the rice-growers of China are connected with me and, to a faint yet real degree, part of me. The vibration of life which they give off reaches me, touches me, and affects me unknown to me. For we are all more or less connected, all more or less in touch: all humanity."

What’s interesting about this passage is that not only does it demonstrate that Lawrence was not an individualist as many critics mistakenly believe, but it also shows that his love of humanity was born not of some transcendental attempt to develop a conceited cosmic consciousness, but out of a sense of class consciousness; it’s the workers and the peasants of the world that Lawrence primarily feels connected to and sympathetic with.

Those who cultivate indifference to the point that they lose any compassion for others are mistaken. Lawrence understands their frank egoism, but refuses to share it - worried by the effect it has on the individual who refuses to care. Their intellectual honesty is fine and it’s good to cast off all spurious sympathy and false emotion, but not if this entails the death of all feeling and one becomes empty inside (believing in nothing, standing for nothing, caring for nobody).

Lawrence admits, however, that some can find perverse pleasure in precisely this becoming-void and take "real pride and satisfaction in pure negation". These he calls the perfect nihilists: those whose shallowness is mistaken for depth; whose false calm is mistaken for strength; whose indifference is mistaken for insouciance. Nietzsche termed them the last men; those who sit grinning furtively in the triumph of their own emptiness.

See: D. H. Lawrence, ‘Insouciance’, and ‘Nobody Loves Me’, in Late Essays and Articles, ed. James T. Boulton, (Cambridge University Press, 2004). The lines quoted are from the latter text.

Posted by Stephen Alexander at 16:57 No comments: