Reflections on Hassan Hajjaj and His 'Kesh Angels 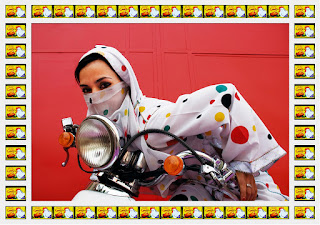 
Moroccan-born, London-based artist and photographer Hassan Hajjaj has a new exhibition opening at Somerset House next month, as part of the 1:54 Contemporary African Art Fair. And this, I think, is a good thing ...

Because Hajjaj produces work that is not only visually exciting to look at, but philosophically interesting to discuss, reflecting as it does his deterritorialized existence spent not simply hip-hopping between two very different countries and cultures, but oscillating, as Deleuze and Guattari would say, between two poles of delirium, struggling to be free and to reinvent each and every gesture, invoking in the process a people to come whose identity is aesthetically styled from diverse elements in a Pop-Punk fashion and who pride themselves on belonging to a race that is impure and illegitimate.

Hajjaj is perhaps best known for a colourful and provocative series of portraits depicting traditionally dressed Arab-Muslim girls on motorbikes, as in the image above; not so much angels with dirty faces, as imagined by Rowland Brown and Jimmy Pursey, as 'Kesh Angels with hidden faces.

However, I don't think he should be defined by these images alone - anymore than he should be obliged to labour under the ridiculous idea that he's the Andy Warhol of Marrakesh. Hajjaj has far more to offer as an artist than such a lazy comparison allows. He is a man who - after much hard work - is finally able to say and do something in his own name, without asking permission or referencing the past from which he flees.

For details of the 1:54 Contemporary African Art Fair, also in London next month, click here.