Screamin' Jay Hawkins: He'll Put a Spell on You 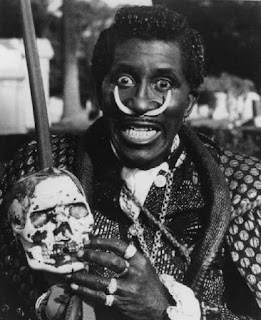 Never a favourite with the NAACP, Screamin' Jay Hawkins played with black racial stereotypes and white racial fears just as he experimented with music and performance, producing a unique sound and look that would later influence shock rockers from Arthur Brown and Alice Cooper to Marilyn Manson.

The above - and many others - were inspired by his mock-satanism and penchant for macabre stage accessories (including smoking skulls, rubber snakes, and shrunken heads).

A former champion boxer and Korean war veteran, Hawkins decided to try his luck as a rhythm and blues singer. After an 18 month spell fronting a band, he left to develop a solo career. His big moment came in 1955, when he recorded an astounding - and drunken - version of his composition entitled I Put a Spell On You, for a black music label owned by Columbia Records.

The grunts, groans and screams that Hawkins added to what was otherwise a fairly standard pop ballard were deemed to be so disturbing that the record was immediately banned from the radio. Nevertheless, it was a huge hit, selling more than a million copies and secured Hawkins a place in the rock 'n' roll hall of fame.

It also ensured he would be typecast as a performer, whose talents as a singer, songwriter and musician, became increasingly irrelevant; people wanted the outrageously dressed madman with a bone through his nose, taking to the stage in a satin-lined coffin and giving his best impression of the voodoo priest Baron Samedi.*

As much as his grotesque persona delighted and amused white audiences - not only in the US, but also in the UK and France - it deeply offended many African Americans. Hawkins, however, was unapologetic, explaining that he was simply an entertainer looking to make a few dollars; not a role model, spokesman for the black community, or a civil rights activist.

Although he had a number of other hit songs - including Constipation Blues (1969); a track about real pain, not merely heartbreak and loneliness - his star was well and truly beginning to fade by the 1970s, although he continued to work up until his death, aged 70, in February 2000, appearing, for example, alongside Joe Strummer in the 1989 cult movie Mystery Train (dir. Jim Jarmusch).

Since his death, I Put a Spell on You has continued to be covered by a wide variety of artists, most of whom treat the song very seriously; very few have been brave (or foolish) enough to attempt to replicate - or better - the unique performance given by Hawkins himself ...**

* Hawkins did sometimes express his unhappiness with this; in a 1973 interview, for example, he bemoaned the fact that whilst James Brown did an awful lot of screaming, he wasn't given the name of Screamin' James Brown and nobody expected him to play the fool or questioned the sincerity of his performance. I'm not overly sympathetic with Hawkins, however, who voluntarily sold his soul to the devil.

** Artists who have covered this song include Nina Simone, Bryan Ferry, Marilyn Manson, and even Bonnie Tyler.

And for a live TV performance of the song, click here.