Fashion in the Age of Coronavirus 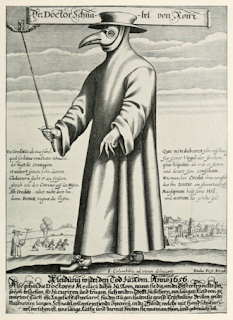 People think that heroic medical and military personnel in their sexy-scary, handmade hazmat suits and face masks are terribly futuristic. But that's probably because most of us have only ever seen them worn in science fictition movies.

Actually, they are simply updating a look that belongs to 17th-century European fashion and mankind's attempt to tailor a fully disease-resistant outfit. The now iconic (and carnivalesque) Venetian beak-doctor's costume was designed by the French royal physician Charles de Lorme (c.1619) to protect against the bubonic plague (i.e., the coronavirus of its day).

It featured a long leather or waxed fabric overcoat and a startling beak-shaped mask that contained a potpourri of aromatic ingredients, ranging from mint and lavender to garlic and cloves, designed to protect the wearer from imaginary gases (miasma) and bad smells that were believed to cause disease (this was before modern science developed germ theory). The outfit was finished with a wide-brimmed hat, boots and gloves, all made from goatskin, and a pair of glass goggles (incorporated into the mask).

Strangely, even those without any fetishistic interest seem to possess a profound (cultural) fascination for men and women in protective clothing.

Where once we kissed the splendid robes of priests and believed only they could save us, now we place our faith in those wearing hi-tech hazmat suits and trust that they will restore health and safety to a diseased and dangerously chaotic world (and the fact that they do so without resorting to frogs and leeches and poking us with a long wooden stick, is something we should be grateful for).

Posted by Stephen Alexander at 17:44 No comments: