Yellow Fever (Notes on the Politics of Asian Girl Fetish) 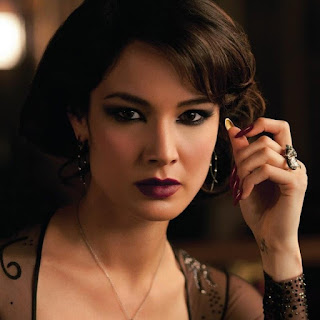 
There's something about Asian girls. They're cute. They're smart.
They have a kind of thing going on.

A friend asked who was my favourite Bond Girl ...

When I replied it was the character Sévérine, portrayed by the beautiful French actress Bérénice Marloe in the 2012 film Skyfall, she smiled and said that this exposed my Asian Girl Fetish (Marloe's father is of Cambodian and Chinese descent) and that this in turn indicated I had politically suspect views and subscribed to a number of pernicious racial and sexual stereotypes.

This may or may not be true, but it kind of made me wish I'd answered differently - although if, for example, I'd named Britt Ekland as Mary Goodnight in The Man with the Golden Gun (1974), couldn't this be said to reveal my Nordic Girl Fetish and indicate subscription to an equal number of stereotypes, perhaps even more pernicious and politically suspect in character ...?

However, happy to play along, I asked what she meant. And she explained that many men who identify as members of the so-called alt-right have a particular penchant for dating women of SE Asian origin, despite their fantasies of white supremacy and purity of blood.

Not surprisingly, this topic has caused heated debate on various white nationalist and neo-Nazi websites and demonstrates to many commentators that there's an amusing level of erotico-ideological confusion within the alt-right world. But, as Audrea Lim points out, there is, actually, no real contradiction in this Asian fetish when one realises how it arises at the intersection of two popular racial myths:

"First is the idea of the 'model minority,' in which Asian-Americans are painted as all hard-working, high-achieving and sufficiently well-behaved to assimilate. If Asians are the model minority [...] then perhaps that opens the door to acceptance from white supremacists.
The second myth is that of the subservient, hypersexual Asian woman."

For many misogynysts, across the political spectrum, the sad fact is that most white women are - thanks to feminism - simply too much trouble; i.e., too unwilling to serve and to pleasure their menfolk. Asian girls, in contrast, are so much more amenable - and - whisper it - far more uninhibited in the bedroom. This idea - deeply ingrained within the pornographic imagination - has its roots in America's post-war experiences in the bars and brothels of Japan, Korea and Vietnam.

Thus it is that the alt-right Asian fetish combines these ideas and "highlights a tension within the project of white supremacism as America grows more diverse [...] The new, ugly truth? Maintaining white power may require some compromises on white purity".

May require, indeed, sleeping with the enemy ...

Posted by Stephen Alexander at 18:57 No comments: