Zoonosis (Revenge of the Animals) 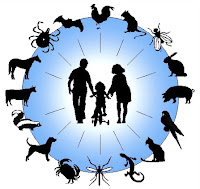 Recent reports of the rare viral disease known as monkeypox recorded in the UK for the first time - first in Cornwall, then in Blackpool - oblige one to reconsider the question of zoonosis ...

The term, zoonosis - from the Greek ζῷον (animal) and νόσος (sickness) - refers to the fact that some infectious diseases can naturally be transmitted between animals and humans. Examples include potentially deadly conditions such as Ebola, rabies, and salmonellosis, as well as the relatively mild - but still deeply unpleasant - monkeypox.

Many strains of swine and bird flu are zoonoses and HIV was originally a zoonotic disease transmitted to people in the early part of the 20th century from our simian friends, though it has since evolved to a separate human-only condition.

Despite the urban myth that infection with HIV was due to human-ape sexual contact, it was most likely due to the consumption of the latter served as bushmeat. Indeed, eating infected food is one of the most common modes of zoonotic transmission.

However, as zoonoses can be caused by a range of pathogens - viruses, bacteria, fungi and parasites - there are numerous modes of transmission, both direct and indirect. Sometimes, this can involve a third party or intermediate species, known as a vector, which carries the disease without itself being infected; think mosquitoes and malaria.

The fact is, like it or not, zoonotic transmission can occur in any context in which there is intimate contact with animals. Be they livestock, domestics pets, or wild creatures, they'll always find a way to undermine the health of man and extract a symbolic revenge upon a human order that treats them with disdain.

Posted by Stephen Alexander at 12:40 No comments: