The Shocking Case of Sacco and Vanzetti 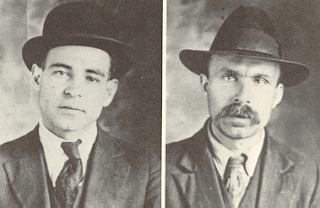 I recently published a post discussing the racism and discrimination faced by Italian immigrants to the United States, detailing the manner in which they were regarded as not quite white enough for good society and, if not inherently inferior, then almost certainly natural born criminals: click here.

Such thinking, which was widespread and particularly virulent during the late 19th and early 20th century, ultimately has tragic consequences. I mentioned the New Orleans lynchings (1891), but I have been reminded also of the case of Nicola Sacco and Bartolomeo Vanzetti; two Italian anarchists who were controversially convicted of armed robbery and first degree murder in 1920 and, seven years later, executed by electric chair in Charlestown State Prison (Boston, MA).

Were they guilty? I don't know. Probably. But what does seem certain is that anti-Italian sentiment (to some degree at least) influenced the jury verdict and sentence passed by the trial judge. A series of appeals were denied, but, as the case increasingly drew global attention, Sacco and Vanzetti found themselves the centre of one the greatest causes célèbres in modern times. In 1927, protests in support of the pair were held all over North America and Europe, as well as in Tokyo, Sydney, Rio de Janeiro, Johannesburg, and many other major cities.

Writers, artists, and academics all jumped aboard the Sacco and Vanzetti bandwagon and pleaded either for a pardon or, at the very least, a new trial (whilst also, of course, promoting their own work and signalling their own virtue). [1] Even Mussolini was prepared to speak up for them! Finally, a commissional investigation was launched, but, after interviewing the judge, lawyers, and several witnesses, the original verdict was upheld.

And so, at round midnight on 23 August, 1927, the pair were introduced to Old Sparky ... To their credit, both men, as atheists as well as anarchists, refused the attendance of a priest. Whilst Vanzetti thanked his guards for their kindness, Sacco went to the chair bidding arrivaderci to his mother.

That, however, was not the close of the case - even if it was very much the mortal end of the two men concerned. Investigations continued in the following decades and the belief in their innocence intensified. Finally, on the 50th anniversary of the execution, the Governor of Massachusetts (Michael Dukakis) proclaimed that Sacco and Vanzetti had been unfairly tried and convicted and that "any disgrace should forever be removed from their names".


One might just point out, however, that guilty or not of the murder for which they were eventually executed, they were followers of Luigi Galleani, the Italian anarchist who advocated violent revolution and had no qualms about political assassination, bombing campaigns, and even the mass poisoning of class enemies. So whilst Sacco and Vanzetti - a shoemaker and a fishmonger by trade - are now regarded as angels by those devoted to their memory, they were at best angels with dirty faces (and blood on their hands). [2]

For at the very least they imagined themselves as terroristas and, when arrested, although they told the police they didn't own any firearms, each was found to be carrying a loaded weapon. It should also be noted that following their indictment for murder, anarchist comrades began a campaign of violent retaliation; including the Wall Street bombing in September 1920, that killed 38 people and injured over 100.

And whilst one might well imagine their being peeved at being found guilty of a crime which they (possibly) didn't commit, I'm not sure it's legitimate (from an ethical perspective) to then call for the death of the judge and demand revenge against those who have wronged them. [3]

Such petty vindictiveness is not very pretty to my eyes ...

[1] Most commentators who have studied this topic now believe that Sacco and Vanzetti were involved at some level in the Galleanist bombing campaign, although their precise roles have not been determined.

[2] In October 1927, H. G. Wells wrote an essay that discussed the case at length, comparing it to the Dreyfus Affair; one that tested and displayed the soul of a people. The following year, Upton Sinclair published his novel Boston (1928), which condemned the American judicial system and made use of Vanzetti's life and writings. However, whilst his fictional portrait of the latter was sympathetic, Sinclair failed to absolve Sacco and Vanzetti of their crimes - hugely disappointing their more fanatic supporters. Years later, he claimed that he had been told (off the record) by their lawyer that the two were, in fact, guilty and he was inclined to believe this was the case. Guilty or not, intellectuals and artists continue to revere Sacco and Vanzetti and there are numerous plays, poems, songs, and films continuing to push the line that only anarchists are pretty.

[3] Following their deaths, several bomb attacks did in fact take place; on the New York City Subway, for example, as well as in a Philadelphia church and at the home of one of the jurors.


Thanks to David Brock, editor of The Lawrentian, for suggesting this post.

Posted by Stephen Alexander at 09:27 No comments: