On the Poetry and Politics of Modern Advertising 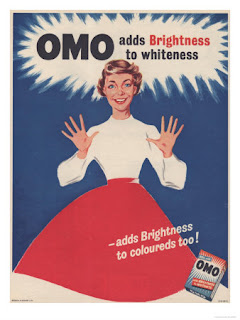 One of the more surprising things about Lawrence is his admiration for the writing skills of Jazz Age American advertisers, who discovered how to seduce consumers via a dynamic use of language. Anticipating by three decades Roland Barthes's mythology on detergents and Omo euphoria, Lawrence argues that some of the cleverest literature today is contained in ads for washing powders:

"These advertisements are almost prose-poems. They give the word soap-suds a bubbly, shiny individual meaning which is very skilfully poetic, would, perhaps, be quite poetic to the mind which could forget that the poetry was bait on a hook."

He doesn't go so far as President Coolidge, who, in a speech three years earlier (1926), declared that advertising ministers to the spiritual side of trade and serves not merely to sell the American Dream, but inspire, ennoble, and redeem mankind, but Lawrence does concede that the commercial world has found a way to bring forth a genuinely imaginative reaction from its customers, just as modern poetry was losing its ability to do so.

Of course, Lawrence being Lawrence, he can't leave things there; can't resist - regrettably in my view - expressing his rather tired and tiresome contempt for the public who are, apparently, passively manipulated by advertising, failing to see or even feel the hook as it catches hold of them:

"The public, which is feeble-minded like an idiot, will never be able to preserve its individual reactions from the tricks of the exploiter. The public is always exploited and always will be exploited. The methods of exploitation merely vary. Today the public is tricked into laying the golden egg ... into giving the great goose-cackle of mob-acquiescence. ... The mass is forever vulgar, because it can't distinguish between its own original feelings and feelings which are diddled into existence by the exploiter."

This, as we now know, is a simplistic view of advertising and of the role played by the consumer. A view born of Lawrence's naive understanding of modern capitalism and the fact that he insists on subscribing to what Foucault terms a repressive hypothesis in which power is viewed negatively, in terms of oppression, rather than considered as a productive network which circulates throughout the entire social body and which is linked to pleasure by many complex mechanisms (not just poetry).

See also: Roland Barthes, 'Soap-Powders and Detergents', in Mythologies, selected and trans. by Annette Lavers, (Paladin Books, 1973), pp. 40-2. In this short but brilliant piece, Barthes discusses the poetry, politics, and psychology of advertising.

Posted by Stephen Alexander at 12:27 No comments: