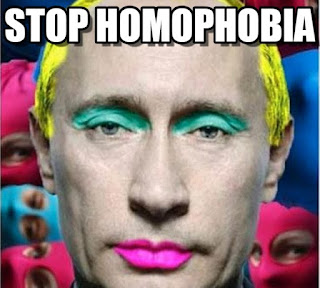 In their classic study, The Politics and Poetics of Transgression, Stallybrass and White argue that the bourgeois subject defines himself through an act of exclusion. In other words, his identity is not merely founded upon self-affirmation: I am X, but also negation of otherness: I am not Y.

For example, I am male / I am not female; I am straight / I am not gay. In this manner he constructs an entire system of binary oppositions that are as tedious as they are restrictive. While one term is highly valued as the good and noble, the other is seen as a form of worthless evil; that which is base, dirty, repulsive, and corrupting.

But here's the thing: the latter, whilst excluded, is nonetheless internalized under the sign of negation and so disgust always retains the imprint of desire - just as, conversely, desire forever keeps an element of disgust. So it is, that whenever one reads the obscene rantings of the homophobe one is struck not only by the level of hate, but also the obsessive and perverse fascination for those practices and those people which are so despised.

To be clear: I'm not simply saying there's always a secret longing on behalf of the homophobe for an experience of gay sex - although doubtless this is often the case - but that there is, to quote Jonathan Dollimore, "an additional structural interdependence of desire and disgust".

And so: "even when homophobia is not obviously a projection of repressed desire, being more a hostile response to the intolerably different, even then, the homosexual, through condensed association, may be one on whom is projected the repressed disgust inherent in desire."

Peter Stallybrass and Allon White, The Politics and Poetics of Transgression, (Cornell University Press, 1986).
Posted by Stephen Alexander at 10:15 No comments: