On the Art of Crucifixion 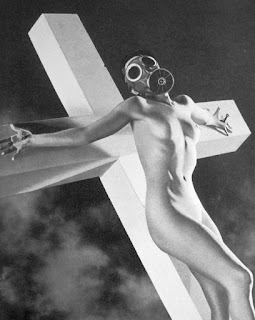 
Images of a crucified figure have a long history; one that it may surprise some readers to discover pre-dates the Christian era, although, of course, most such images are of Jesus hanging on the Cross and thus belong to a particular religious tradition of art.*

Whilst crucifixion art had its heyday in the Middle Ages, when increasingly gruesome and realistic representations of suffering became de rigueur, modern artists have nevertheless continued to find inspiration in the subject matter.

Dalí, for example, famously gave us his version in 1954: Crucifixion (Corpus Hypercubus); a surreal or, more accurately, nuclear mystical painting in which Christ is crucified not to a simple wooden cross, but to the unfolded net of what is termed within geometry a tesseract (i.e. the four-dimensional analogue of the cube). Some critics regard it as one of Dalí's most successful works, uniting science and religiosity in an ingenius manner.

What I love about these works is - in contrast to Dalí's picture - the fact that there's nothing spiritual about them; in fact, they are obscenely material and treat human flesh as if it were butcher's meat on display. As Bacon confessed to the critic and curator David Sylvester when discussing the above works:

"I've always been very moved by pictures about slaughterhouses [...] There've been extraordinary photographs which have been done of animals just being taken up before they were slaughtered; and the smell of death. We don't know, of course, but it appears by these photographs that they're so aware of what is going to happen to them, they do everything to attempt to escape. I think these pictures were very much based on that kind of thing, which to me is very, very near this whole thing of the Crucifixion. I know for religious people, for Christians, the Crucifixion has a totally different significance. But as a non-believer, it was just an act of man's behaviour to another."

Finally, mention must be made of an extraordinary photograph from 1938 by Horace Roye, who is perhaps most fondly remembered today for his thousands of female nude portraits (or Eves without leaves as he jokingly referred to them).** Entitled Tomorrow's Crucifixion, it depicts a naked woman wearing a gas mask whilst nailed to a crucifix. Unsurprisingly, it caused a huge amount of controversy at the time, but is now rightly regarded as one of the most striking images from the pre-War period, anticipating the horrors to come.

* Interestingly, in the first three centuries of Christian iconography the crucifixion was rarely depicted. It's thought that any such images were viewed as heretical by early church leaders who regarded the subject as unfit for artistic representation and preferred to focus the attention of believers on the miracle of resurrection.

** A bit like D. H. Lawrence three decades earlier, Roye was prosecuted in the 1950s for obscenity after refusing to airbrush out pubic hair from photos of his models. Defending himself in court, Roye successfully challenged the absurd idea that nudes were only acceptable if made to look as smooth and lifeless as marble statues, or as impersonal as dead fish.

Posted by Stephen Alexander at 08:03 No comments: