Of Mites and Men (Notes on the World of Dust) 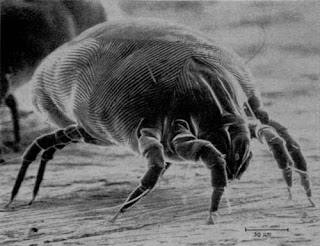 Apart from having to listen all day (and often all night) long to my mother's babbling stream of consciousness - an inane interior monologue involuntarily made public thanks to her dementia - one of the more depressing aspects of my Essex exile is living in a home in which dust is a permanent and triumphant feature.

Like many people, I used to subscribe to the comforting myth that dust is essentially made up of dead skin cells; i.e. human in origin and harmlessly inert. But, thanks to Mr Sheen, I now know that this isn't the full story. In fact, the composition of dust is far more complex, far more vital, and potentially far more menacing.

For house dust not only contains human detritus, but also insect remains, plant pollen, animal hairs and various fibres, materials and pollutants found in the local environment all of which create a perfect feeding and breeding ground for microscopic, translucent-bodied arachnids known as dust mites.

These cosmopolitan little creatures are the major inhabitants of dust and they flourish in the dark, warm spaces provided by mattresses, bedding (particularly pillows), upholstered furniture, carpets, etc. Unfortunately, their faeces is known to contain an enzyme harmful to people, particularly those with asthma who are commonly allergic to such. Dust mites are also thought to be a cause of eczema.

As if the thought of these mites creeping about shitting everywhere weren't bad enough, scientists who have studied the subject also estimate there are more than 70,000 types of fungi and over 125,000 kinds of bacteria contained in the dust we vainly try to keep at bay and which we inhale with every breath.

One day, perhaps, it might be possible to artificially control and manipulate the dust; to fill our homes with microbes that actively improve human health. Until then, the best we can do is either wipe and vacuum with renewed vigour, or hope that Quentin Crisp was telling the truth when he observed that after four or five years the build up of dust plateaus.

Readers interested in dusty ecosystems and bacterial diversity might like to explore the online public science project established by the Rob Dunn Lab entitled Wild Life of Our Homes.

Posted by Stephen Alexander at 13:40 No comments: