On Piss Play and the Revaluation of Values 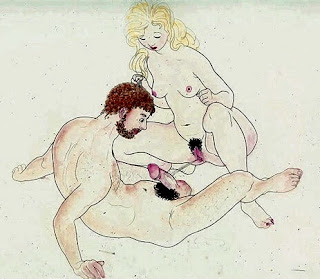 
I recently read that English sexologist and social reformer Havelock Ellis was impotent until the age of sixty when, to his surprise, he discovered he could be aroused by the charming sight of a woman pissing.

He was so delighted with this discovery, that he gave his own perverse pleasure the scientific-sounding name of undinism and, after the death of his wife, the openly lesbian writer and feminist, Edith Lees, Ellis formed a relationship with a French woman, Françoise Lafitte, who, apparently, was more than happy to indulge her man's penchant for watersports.

Other illicit lovers find something joyous and liberating in the thought of an amorous object with a particular propensity to pee. To paraphrase Roland Barthes and thereby allow a little queer sentimentalism into the text:

By releasing the contents her bladder without constraint, hers is a body in liquid expansion, a body showered in gold. To wee together, to play together, to come together, is to rediscover the innocence of early childhood.

Posted by Stephen Alexander at 18:33 No comments: