Postmodern Approaches to Literature 3: The Pleasure of the Text (Part I) 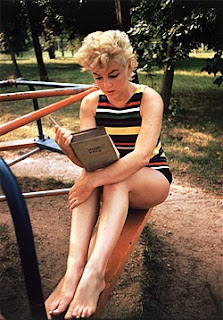 Marilyn being pleasured by James Joyce


The Pleasure of the Text, published two years after 'From Work to Text', clearly picks up from where the latter left off. It offers us not a poetics, but an erotics of reading. And, also, a challenge to all forms of moral asceticism and militancy which have no time for sensual pleasure and despise the body. Barthes explained to an interviewer at the time:

"I felt that today’s intellectual language was submitting too easily to moralizing imperatives that eliminated all notion of enjoyment, of bliss. In reaction, I wanted therefore to reintroduce this word [pleasure] within my personal range, to lift its censorship, to unblock it, to un-repress it." [1991]

This, actually, was quite a daring thing to do and it lost Barthes many friends and supporters (even as it won him a new, wider readership). I suspect that a lot of the continued hostility aimed towards postmodern approaches to literature and to life is that they don’t take themselves too seriously and concern themselves with pleasure. Nothing enrages the puritan more than this - unless it's logical inconsistency and The Pleasure of the Text opens by imagining a figure who "abolishes within himself all barriers, all classes, all exclusions, not by syncretism but by simple disregard of that old spectre: logical contradiction" [1990].

Over the course of some 46 fragments spread over 67 pages and arranged alphabetically by title (i.e. arbitrarily), Barthes speaks in favour of such an anti-Socratic hero who mixes every language and endures the mockery of moral-rational society without shame. And he reveals him to be "the reader of the text at the moment he takes his pleasure" [1990].

But for Barthes there are two types of pleasure; the pleasure of the text, which he terms jouissance and the pleasure of the work, for which he uses the common word plaisir. Of course, there is no absolute distinction between them and Barthes freely admits that his use of such an opposition is here, as elsewhere, purely provisional and strategic:

"The opposition 'pleasure/bliss' is one of those voluntary artificial oppositions for which I’ve always had a certain predilection. ... These oppositions shouldn’t be taken literally; for example, by asking if such and such a text belongs to the order of pleasure or of bliss. These oppositions are intended above all to clear more ground, to make headway - just to talk and write." [1991]

But, having said that, Barthes does then qualify this statement by adding: "the difference between the two words is still quite real ..." [1991]. What, then, is this real difference?

In ‘From Work to Text’ Barthes puts it this way:

"Certainly there exists a pleasure of the work ... I can delight in reading and re-reading Proust, Flaubert, Balzac ... But this pleasure, no matter how keen and even when free from all prejudice, remains in part (unless by some exceptional critical effort) a pleasure of consumption; for if I can read these authors, I also know that I cannot re-write them ... and this knowledge, depressing enough, suffices to cut me off from the production of these works ... As for the Text, it is bound to jouissance, that is to a pleasure without separation." [1977]

Throughout The Pleasure of the Text he expands upon and plays with this distinction, using a libidinally material and perverse language of gay desire; words such as cruise, for example, coming to prominence. The language used is also significantly informed by Lacanian psychoanalysis. For Lacan, famously, the unconscious is structured like a language and the subject - thought of primarily as a desiring subject - is perpetually seeking out the lost object of their desire. As Mireille Ribière writes:

"The prime function of language, and hence literature, is to signify this fundamental sense of loss. Therefore, desire is the force that drives reader and writer endlessly to go from signifier to signifier in search of fulfilment and pleasure."

"The pleasure of the text is like that untenable, impossible, purely novelistic instant so relished by Sade’s libertine when he manages to be hanged and then to cut the rope at the very moment of his orgasm, his bliss."
[1990]

What Barthes is excited by then, is the thought of a limit or of an edge between two terms and the pathos of distance (or break) between them. He doesn’t want the destruction of culture or of narrative; he wants these things to be taken to the point at which they are lost and we too lose ourselves in some manner.

Can classic works promise us this experience of bliss or are they strictly tied to a form of pleasure which simply reaffirms cultural convention and our sense of self? Barthes, often thought of as a champion of the nouveaux roman, surprisingly still seems to have a lot of time for the works of the great 19thC authors. For he suggests that if we read them in a writerly manner - unconcerned with the integrity of the text - and at our own pace or rhythm - bypassing those passages or pages which we find boring - then we may yet find them newly pleasurable: "Thus what I enjoy in a narrative is not directly its content or even its structure, but rather the abrasions I impose upon the fine surface: I read on, I skip, I look up, I dip in again." [1990]

Of course, this has "nothing to do with the deep laceration the text of bliss inflicts upon language itself" [1990], but it does mean that we can develop an approach to literature which allows us still to read a work like War and Peace without nodding-off and having the book fall from our hands. Ironically, the only way to read the more avant-garde texts is to go slowly and carefully through them in a leisurely, aristocratic manner. Try to read a novel by Philippe Sollers or Maurice Blanchot quickly and it will become "inaccessible to your pleasure" [1990].

And so, to reiterate, we have two types of text: the text of pleasure that "comes from culture and does not break with it", linked to a "comfortable practice of reading" [1990]; and the text of bliss that "imposes a state of loss, the text that discomforts ... unsettles the reader’s historical, cultural, psychological assumptions, the consistency of his tastes, values, memories, brings to a crisis his relation with language" [1990].

The reader can thus enjoy the satisfaction of plaisir which guarantees their subjective consistency, or the promise of its loss via jouissance.

Note: this and the two related posts have been assembled from extensive notes made for a course entitled Postmodern Approaches to Literature, that I taught at Morley College, London, in the Spring of 2010. To read PAL 1 click here. To read PAL 2 click here. To go to part two of this post click here.

Posted by Stephen Alexander at 07:43 No comments: