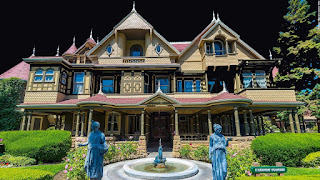 The House at 525, South Winchester Blvd.

If I were a rich man ... I'd build a big tall house with rooms by the dozen, right in the middle of the town. There would be one long staircase just going up and one even longer coming down, and one more leading nowhere, just for show. [1]

Alternatively, I would attempt to purchase the Queen Anne style Victorian mansion in San Jose, California, known as the Winchester Mystery House ...

Originally the residence of Sarah Winchester - widow of the famous firearms magnate - the Mystery House is a chaotic wonder full of many curious and amusing features; a designated historical landmark as well as a popular tourist attraction.

Construction began on the House under Mme. Winchester's personal supervision in 1884 and continued, ceaselessly, until her death in 1922, at which time work immediately came to a halt. The fact that the House remained unfinished was not something that would have troubled Sarah. Indeed, she desired an ever-changing, ever-expanding, building that would make a suitably spooky home for the ghosts of those who had had the misfortune to be killed by the deadly repeating rifles manufactured by her husband's family.

As one might imagine, building such a house wasn't cheap. But Sarah had inherited more than $20 million dollars following the death of William Winchester in 1881, and also received nearly 50% ownership of the Winchester Repeating Arms Company, giving her an income of a $1000 a day (equivalent to c. $26,000 a day now), so she could well afford to indulge her whims, fantasies, and strange obsessions.

The idea for the House came from a Boston-based medium, supposedly channeling Sarah's late husband. Not wanting to further anger the spirits of the dead, Sarah immediately headed out West and began building her redwood seven-story mansion. No architects were consulted and the house was constructed in a haphazard manner with many queer features, including doors that don't open and stairs that lead nowhere. Whether these and other features were intended to confuse the ghosts isn't clear, but they certainly add to the feeling of unease experienced by visitors.


Although there are now only four stories and the grounds of the estate are much reduced in size, the Mystery House still has over 150 rooms, including 40 bedrooms and two ballrooms. Originally, however, there was only one working toilet and shower; other washrooms were merely decorative and non-functioning. No expense was spared on the numerous adornments, including a unique stained glass window that featured her favourite spider's web design and the number 13. This window, which was never installed, exists in a storage room along with other priceless treasures.


One of the windows that was installed was designed by Louis Comfort Tiffany, using prismatic crystals which, when struck by sunlight, would cast a fabulous rainbow across the room. Unfortunately, Mme. Winchester decided to place it in a room that recived no natural light, preventing the effect from ever being enjoyed.


After her death, the Mystery House was sold at auction to a local investor and then leased to John and Mayme Brown, who opened it to the public in February 1923. Today, the House is owned by a private company representing the descendants of John and Mayme Brown. It is still open to the public and it still retains the many bizarre elements that reflect Mme. Winchester's unusual beliefs and occult preoccupations.

Whilst a house full of spooks is interesting in itself, what fascinates me philosophically about the above is similar to what fascinated Roland Barthes about the ship on which Jason and his crew sailed, the Argo; a vessel which the Argonauts continually rebuilt and added to, so that they effectively ended up with an ever-new (ever-different) ship, without having to alter either its name or form.

Similarly, the Winchester Mystery House "affords the allegory of an eminently structural object, created not by genius, inspiration, determination, evolution, but by two modest actions (which cannot be caught up in any mystique of creation): substitution (one part replaces another, as in a paradigm) and nomination (the name is in no way linked to the stability of the parts)". [2]

In other words, the Mystery House is an uncanny object of unsteady foundation and no identity other than its form.

[1] 'If I Were a Rich Man' is a song from the 1964 musical Fiddler on the Roof, written by Jerry Bock and Sheldon Harnick. Lyrics © Warner Chappell Music, Inc. / Concord Music Publishing.