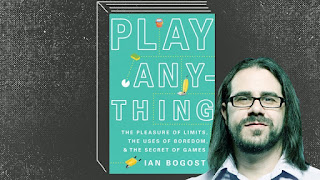 
Preface: Life Is Not a Game

Ian Bogost describes himself as a philosopher who also happens to be a game designer. But I've heard it said that he's more of a game designer with pretensions of being a philosopher. Either way, he's not stupid. But he is badly in need of a haircut.

His Alien Phenomenology (2012) was a book that I enjoyed, so I've been looking forward to reading his most recent work, Play Anything, since its publication in the autumn of 2016 (apologies to readers who expect this blog to always be bang up to date).

From what one gathers from the Preface, Play Anything promises to be a work of object-oriented ethics; one that offers a perspective on "how to live in a world far bigger than our bodies, minds, hopes, and dreams, and how to do it with pleasure and gratitude" [x].

Bogost doesn't think life is a game. But he does think that games teach us an important life lesson. And it's a lesson concerning the pleasure of limits. To play, he says, is to accept things on their own terms. And to generalise this notion of play is to see structures constrained by their own limitations at work everywhere.

This doesn't sound all that much fun. But Bogost assures us that if we learn how to play anything, our lives will be "better, bigger, more meaningful, and less selfish" [x] - a line that could have been lifted straight from an overly-optimistic self-help book. Or off a bottle of snake oil.

Our mad obsession with the ideal of freedom, argues Bogost, has made us "miserable and bored" [xi]. We need to understand that real freedom is the chance to find fulfilment by operating within and exploring the implications of "a constrained system" [xi] - i.e., the actual world as is.

Further, according to Bogost - never one to shy away from the chance to project his own anxieties onto his readers - we are marked by a profound fear; not just of ourselves (our desires and dark fantasies) or our mortal fate (that great shipwreck into the nauseous), but also of the world and its contents - objects and events alike.

Whether confronted by a pickle jar with a tight lid, or the prospect of an illicit love affair, "we worry that it might harm or disappoint us" [xi] - or that we might fail to live up to the challenge that all things present. What we need to do, says Bogost, is "slough off all these false fears that keep us from truly living" [xii].

What he doesn't say is why these fears are false; I have to admit they seem pretty genuine and perfectly legitimate to me. Nor - in the Preface at any rate - does he instruct us how to "replace them with a new sense of gratitude" [xii] towards all the miraculous opportunities the world affords us.

Well, that's not quite fair - he does suggest that play is the key. Though it's not play in the ordinary sense of the word; Bogost wants to convince us of the need for a radical form of play that is profound and deliberate and "bores through boredom in order to reach the deep truth of ordinary things" [xii].

One suspects that Bogost has the Heraclitean line about man only becoming himself when he achieves the seriousness of a child at play in the back of his mind. Or maybe he's thinking of Nietzsche's playful vision of philosophy conceived as a gay science. But if he is, he's not going to give the game away as there's no mention of either philosopher in the index - something I regard as a bad sign ...

See: Ian Bogost, Play Anything: The Pleasure of Limits, The Uses of Boredom, and the Secret of Games, (Basic Books, 2016). All lines quoted are from the Preface, pp. ix-xii.

Posted by Stephen Alexander at 15:38 No comments: