Reflections on Madam Butterfly 1: The Opera 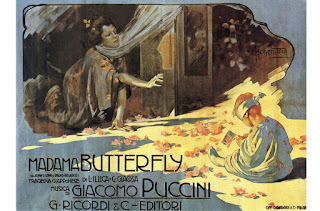 Based on a short story by the American author John Luther Long, the work has become a firm favourite with opera goers the world over, although, in its original two act version, it was poorly received, obliging Puccini to significantly revise it; dividing the second act in two, for example, and inserting the Humming Chorus as a bridge to what became Act III.

These and other changes did the trick, although Puccini continued to revise the work, producing a fifth and final version in 1907 - the composer's cut - which has become the one most often performed today.

And, rather surprisingly perhaps, Madama Butterfly is still frequently staged, despite our living in a politically woke era obsessively concerned with racism and sexual abuse, things that are central to this tragic tale of an American naval officer's exploitation and betrayal of a 15-year-old Japanese girl and her subsequent suicide.

I suppose this shows that whilst some contemporary audience members - as well as some members of the cast and production team - may struggle to reconcile their enjoyment of this musical masterpiece with the fact that it was written by a dead white European male indulging in Orientalism of the first degree, most members of the paying public don't give a shit as long as they get to hear one of the most famous (and beautiful) of arias, Un bel dì vedremo.


The fact is, when most people pop along to the theatre, they do so hoping to be entertained; they don't buy tickets for Madama Butterfly because they are concerned about white male privilege or the sexual exploitation of vulnerable young women in the developing world, any more than when buying tickets to The Phantom of the Opera it's because they care about facial disfigurement or the condition of the sewers in 19th century Paris ...

To read a sister post to this one, on Puccini's influence on pop and fashion - with reference to the work of Malcolm McLaren and John Galliano - please click here.

Posted by Stephen Alexander at 18:31 No comments: