A Postcard from Southend-on-Sea 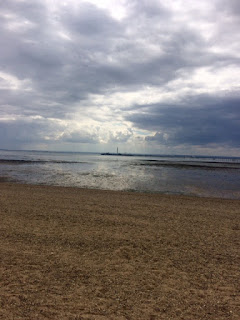 Southend-on-Sea, Essex, lies approximately 40 miles east of London on the north side of the Thames Estuary; a region that has produced its own virulent strain of English now spoken in many regions of this blessed plot, this earth, this realm, this Ingerland.

It is home to the world's longest pleasure pier; a marvel of 19th century engineering that everyone from Princess Caroline to Arthur Daley has strolled along at some point.

I first day-tripped to Southend with my parents in the early seventies. By then - although I didn't know it at the time - it was already in decline as a popular holiday destination. Everyone who could was jetting off to sunny Spain instead. For who wants soggy fish and chips and a mug of lukewarm tea, when you can have a big plate of paella washed down with a cheap bottle of vino?

Still, I always loved my time in Southend as a child, beginning with the train ride from Romford via stations whose names had an exotic and almost magical allure - Shenfield-Billericay-Wickford-Rayleigh-Hockley-Rochford-Prittlewell - my excitement growing as I got ever closer to the coast and the thought of a fresh plate of cockles raked straight out of the mud at low tide, or an ice-cream from Rossi's.

There was no real beach to speak of and the grey sea was always out as far as I remember. But the place had a certain working-class Cockney charm (dare one say authenticity) and I had hours of fun in the amusement arcades and Peter Pan's Playground (which I preferred to the rather intimidating Kursaal full of young skinheads in their boots and braces and ageing Teddy Boys).

What I enjoyed best of all, however, was sitting in the landscaped gardens of the Shrubbery eating a packed lunch, which always involved either a ham or cheese sandwich. There was a little stream and a waterfall, a fairy castle and a few left-over figures; remnants from its fifties heyday as Never Never Land.

Today, over forty years later, Southend is still on sea and many things have remained essentially the same; the pier, for example, still stretches a mile out to nowhere (although now you have to pay to walk along it).

But the deprivation of the town is as noticeable - and as shocking - as the tattooed obesity of the natives, or the large number of women hanging around the newly built lagoon wearing hijabs and burkinis and recreating scenes that more closely resemble Mogadishu than the lost world of Jane Austen and Donald McGill.

Posted by Stephen Alexander at 16:53 No comments: