On the History and Politics of the Bikini 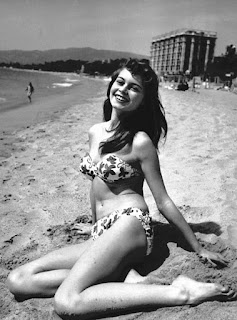 
Someone writes to say that my recently published post discussing the French burkini ban [click here] left them feeling irritated and disappointed:

"You not only failed to condemn the actions of the mayor of Cannes, but you also missed the opportunity to put on record your opposition to all forms of racism and Islamophobia. Instead, by placing a serious issue within the context of a song from a Hollywood musical of all things, you turn it into something that can be treated in a lighthearted manner. Let me assure you it isn't funny for those Muslim women affected by the ban."

Apart from the slightly worrying fact that I seem to irritate and disappoint a lot of people these days - and not just readers of this blog with a proverbial bee in their bonnet, chip on their shoulder, or stick up their arse - this criticism essentially leaves me cold. Cold with contempt, rather than in the sense of being unmoved or indifferent. For not only is it presumptuous, but it's ultimately an attempt to force me into taking a position in line with the speaker's own. And - for the record - I'm not sure I share my critic's ideological interpretation of events, or political worldview.

First of all, I don't think in oppositional or dualistic terms. Nor do I subscribe to any form of ascetic militancy or militant asceticism that seeks to pass judgement. So I didn't fail to condemn the actions of David Lisnard - I chose not to.

What's more, I sympathise with the mayor and, whilst not wishing to endorse his actions, I understand where he's coming from. For he's not simply reacting to the terrible events in Nice, so much as actively defending the values of Western modernity; values which, for the fashion-conscious, sexually liberated inhabitants of the Côte d'Azur, are embodied forever in the ideal figure not of Marianne, but a bikini-clad Brigitte Bardot.

In order for this to be appreciated, perhaps a brief history of the bikini is in order ...

Whilst the two-piece swimsuit existed even in classical antiquity, the modern itsy-bitsy bra-top and teenie-weenie bottoms combination as we know it today was designed by a Frenchman, Louis Réard, in 1946. He named it after an atomic bomb test site in the Marshall Islands, Bikini Atoll, and hoped that his revealing outfit would create "an explosive commercial and cultural reaction".

Made from just 200 square centimetres of material, the bikini was advertised as smaller than the smallest swimsuit and came packed in a little box measuring 5 x 5 cm. When Réard had difficulty finding a model willing to showcase his daring and devastating design for the atomic era, he hired a 19-year-old nude dancer, Micheline Bernardini, from the Casino de Paris. Following her appearance at a press launch on July 5th, 1946, held at the Piscine Molitor, she received over 50,000 fan letters.

Although initially banned in Catholic countries including Spain, Portugal and Italy, following the Vatican's declaration that it was sinful, the bikini soon became a must have item of beachwear among young women; particularly after fashion models and film stars, such as Brigitte Bardot, posed in them for glamorous photo shoots. I think a reporter writing for Le Figaro understood best what was going on:

"People were craving the simple pleasures of the sea and the sun. For women, wearing a bikini signaled a kind of second liberation. There was really nothing sexual about this. It was instead a celebration of freedom and a return to the joys in life."

That surely is the crucial point: the bikini is not merely a skimpy swimsuit. Rather, it's a symbolic garment and a vital form of self-expression within the post-War Western world; a sign that we belong and want to belong to a more liberal and more secular form of society in which - rightly or wrongly - truth loves to frolic semi-naked on the sand.

And that's why I don't think it's being culturally insensitive to ban women in burkinis from the beautiful beaches of the French Riviera. Au contraire, I think it's arrogant that some Muslim citizens display such wilful ignorance of the history, politics and fashion of modern France that they fail to see why the burkini is likely to cause offence; it's an affront to the European way of life and to French joie de vivre.