Melt: On the Transubstantiation of Love 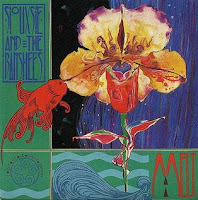 Cover art for the single 'Melt!' by
Siouxsie and the Banshees
(Polydor, 1982)

"Are you familiar with the frightening sensation of melting", asks Cioran; "the feeling of dissolving into a flowing river, in which the self is annulled by organic liquidization?"

Well, as a matter of fact, thanks to the British post-punk band Siouxsie and the Banshees, I am ...

The lovely song 'Melt!', released as a single from their fifth studio album, A Kiss in the Dreamhouse, gave an interesting - some might say psychedelic - insight into the phenomenon way back in 1982.

The lyrics betray a decadent and delirious fascination with sex and death and some of the images have fetishistic overtones; the melting lover is handcuffed in lace, blood and sperm, before eventually being beheaded.

Whilst it's tempting and certainly wouldn't be mistaken to discuss the song in relation to Baudelaire and Masoch - or the sleeve art with reference to Klimt - I think it just as legitimate (and in some ways more interesting) to refer to Cioran's astonishing first book, On the Heights of Despair (1934).

(Don't get me wrong: I love Flowers of Evil and Venus in Furs as much as the next man, but so much has already been written about these texts, that it's hard to offer any further insight. Cioran's work, on the other hand, is shamefully underdiscussed and undervalued. Indeed, much of it is hardly known in the English-speaking world, even by people who thrill to similar authors, such as Bataille and Blanchot, for example.)

Like the Banshees, Cioran eroticises the notion of melting, or what Barthes would describe as the body's liquid expansion and include crying as well as ejaculating. For love, writes Cioran, "is a form of intimate communion and nothing expresses it better than the subjective impression of melting, the falling away of all barriers of individuation".

Although he seems to regard sex as marginal to the irrationality of love, Cioran concedes that you cannot conceive of the latter without the former and insists that there's no spiritual love between the sexes; "only a transfiguration of the flesh" via which lovers identify themselves so intensely with one another that they create an illusion of spirituality.

Only at this point does the sensation of melting occur: "the flesh trembles in a supreme spasm, ceases resistance, burning with inner fires, melting and flowing, unstoppable lava". In other words, it's a form of suicide in sex, as Siouxsie sings.

See: E. M. Cioran, On the Heights of Despair, trans. Ilinca Zarifopol-Johnston, (The University of Chicago Press, 1992). I'm quoting from sections entitled 'Weariness and Agony' and 'On the Transubstantiation of Love', pp. 16-17 and 84.

Play: Siouxsie and the Banshees, 'Melt!', from the album A Kiss in the Dreamhouse (Polydor, 1982): click here.

This post is in (mostly) fond memory of Gillian Hall.

Email ThisBlogThis!Share to TwitterShare to FacebookShare to Pinterest
Labels: a kiss in the dreamhouse, barthes, bataille, baudelaire, blanchot, e. m. cioran, eroto-thanatology, klimt, melt, melting, on the heights of despair, on the transubstantiation of love, siouxsie and the banshees
Older Posts Home
Subscribe to: Posts (Atom)