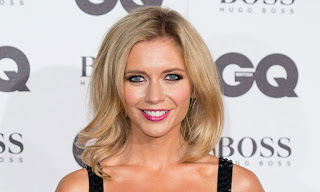 Apart from being very beautiful and highly intelligent, Countdown's resident mathematician and co-presenter, Rachel Riley, is also a woman of great courage and integrity - as demonstrated by her standing up to the anti-Semitism of those who regard themselves as belonging to the radical left (and/or Corbyn's Labour Party), something for which, as might be imagined, she has received appalling abuse from online cowards.

Born in Rochford, Essex, educated at Oxford, Ms. Riley describes herself as Jewish (albeit non-religious) and so is sensitive to the question of anti-Semitism and fully entitled to speak out on it: this is not prostituting her heritage, as one (now suspended) member of the Labour Party tweeted; nor is she poisoning the memory of her ancestors (quite the contrary).

Despite the abuse - much of it followed by the hashtag #BoycottRachelRiley - I'm glad to see Ms. Riley announce her intention to carry on sharing her views on social media and elsewhere. I'm also pleased to see that several of her celebrity pals have come to her defence, including David Baddiel, David Schneider and Katherine Ryan.

I'm not a celebrity. Nor am I a friend of Ms. Riley's. But I would also like to add my support here. Special mention should also go to the actress Tracy Ann Oberman who, like Rachel Riley, has dared to take a stand and call out anti-Semitism. She too has my admiration and fond regards.

Many people insist that anti-Zionism is distinct from anti-Semitism and I'm broadly sympathetic to this argument; clearly, there can be perfectly legitimate criticism made of Israel and its government.

Having said that, we all know that anti-Zionism is often a coded (or disguised) form of anti-Semitism and, ultimately, like Roland Barthes and Michel Foucault, I think one has to show solidarity with the State of Israel and question the thinking behind Deleuze's support for Palestinian terror attacks, or Badiou's desire to see Israel disappear off the face of the earth (perceiving as he does its very existence to be a crime).

And I say this not as someone who has a vested interest in politics or is particulary well-informed about all the issues, but, rather as someone who, like Larry David, would be perfectly happy to eat great chicken anywhere and who knows that the penis doesn't care about race, creed, or colour ...*


* Note: I'm referring here to the season 8 episode of Curb Your Enthusiasm entitled 'Palestinian Chicken', (dir. Robert Weide, 2011) in which Larry, a Jew - a big Jew - meets Shara, a virulently anti-Semitic Palestinian (played by Anne Bedian). Despite their differences, they are instantly attracted to one another and amusingly use the political and religious tension between themselves to heighten and intensify a sexual encounter: click here.

Posted by Stephen Alexander at 14:13 No comments: