In Praise of a Well-Turned Ankle 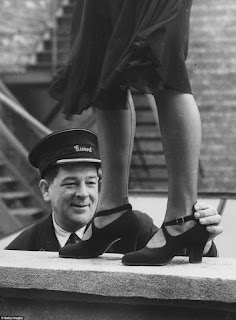 A judge and contestant in an ankle contest
organised by the Women's Section of the
British Railways Social Club,
Oxford, 1949

And the key to a lovely looking ankle?

The curve: that and a pronounced narrowing from calf to foot (an effect easily enhanced by wearing a pair of high heels). Ideally, there should also be a little vein - visible, but not overly-prominent - cutting across the malleolus (whether this be the medial or lateral malleolus is a matter of personal preference).

Essentially then, it's fair to say that fine ankles determine my desire; just as they did for the ancient Greeks, who often explicitly related the (un)desirability of woman to the slenderness of her ankles. According to the lyric poet Archilocus, for example, a woman with fat ankles deserves to be thought of as a vulgar object of loathing.

I have to admit, this seems a bit harsh - certainly by modern standards. So maybe it's just as well that Archilocus wasn't around in the 1930s and '40s to judge the ankle contests that were very popular in England at this time, with even an annual pageant on the rooftop of Selfridges.

Originally, the contestants were concealed behind a thick curtain, only displaying their lower-legs and feet and still wearing their stockings and shoes. In later years, however, the organisers did away with this aspect which was meant to afford anonymity and modesty.

Once the women were lined up, a judge - usually but not always a man (and, strangely, often the local bobby) - would slowly walk up and down, occasionally stopping for a closer inspection and to take a few measurements. Finally, he would announce the lucky winner who - as the events were often sponsored by hosiery companies - could expect to receive a prize pair of stockings, as well as the adulation of her local community.

Now, I know what some will say about these contests. But such spoil-sports view everything with an evil eye and are possessed by the spirit of gravity. Women should be proud of their ankles, poets should sing of them, and honours should be bestowed upon those who possess the prettiest looking pairs.

Surprisingly, the associate fashion editor of The Guardian agrees, arguing that the ankle "should be a focus of national celebration". It's a blessing, she writes, that whilst British women are often large of thigh and chunky of calf, they have ankles "made in the image of Persephone".

See also Phoebe Jackson-Edwards, 'Best foot forwards ...' Daily Mail (14 Oct 2015), an article which is illustrated with marvellous black and white photos of ankle contests in the 1930s and '40s, including the one below, taken in Hounslow, in July 1930. Click here. 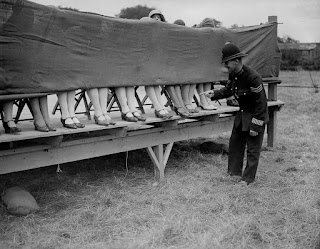 Posted by Stephen Alexander at 13:19 No comments: