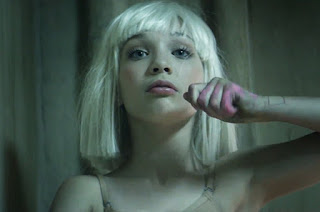 Maddie Ziegler performing in "Chandelier".
Vocals by Sia. Written by Sia and Jesse Shatkin. From the album 1000 Forms of Fear (2014).
Video dir. by Sia and Daniel Askill. Choreography by Ryan Heffington.


A journalist writing for People magazine described Maddie Ziegler as a super-human child or graceful alien sent to Earth from Planet Talented to make us lesser beings look really stiff and clumsy in comparison. And, indeed, watching this eleven-year-old spin and scuttle around like the world's prettiest cockroach, or an insane fairy, in one of YouTube's most viewed videos, does make one feel not only inept and inferior, but very, very old.

We might, as Spinoza would say, still not know what a body can do; but we now have a much better idea, thanks to Maddie Ziegler, of what fabulous things some little bodies are capable of. Once seen, her mesmerizing performance is never forgotten - but never quite believed either (thus the compulsion to watch the video over and over). It's magical. It's grotesque. And it's genius. 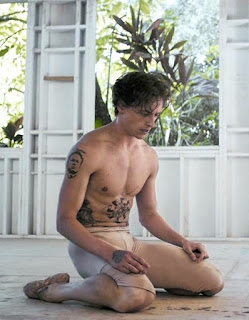 Sergei Polunin performing in "Take Me to Church".
Vocals by Hozier. Written by Hozier. From the album Hozier (2014)
Video dir. by David LaChapelle. Choreography by Jade Hale-Christofi.

Set in a rather lovely white studio, amongst the trees and flooded with natural light, the twenty-five year-old Ukrainian shows off his muscles, his scars and his numerous tattoos; pirouetting, leaping and rolling around the stripped wooden floor, dressed in a pair of nude tights cut off above the knee. His passionate - if, sometimes slightly hackneyed performance - not only showcases his own genius and demons, but captures the angry brilliance of Hozier's song.

Indeed, I would suggest that anyone who isn't moved by these two performances, these two songs, is probably dead ...