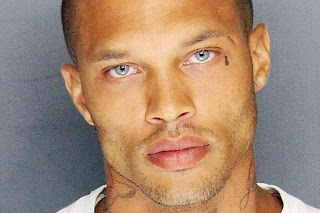 Jeremy Meeks: the model prisoner who stole a million hearts

Following a recent post on criminals and capital punishment [click here], I received two emails from concerned readers. The first expressed outrage and disappointment that I could write such reactionary rubbish:

"You Sir, are a disgrace and your views - even if endorsed by D. H. Lawrence - border on being no more than a crude form of neo-fascism."

The second sought to convince me that even the most dangerous of serial killers has a soul to be saved and that this can be accomplished not through harsh punishment, but through Love - and not just the redeeming love of Jesus, but the carnal affection of a good woman:

"As a trained sex therapist who has worked with many violent men, I know a lot of their anger stems from feelings of inadequacy and that these issues can best be dealt with in the bedroom, rather than the prison cell."

These latter remarks got me thinking about hybristophilia; a paraphilia in which the amorous subject is attracted to individuals who have committed an illegal act or atrocity and sexually aroused by the thought of their misdeeds. Many high-profile felons receive explicit fan-mail, love letters, and indecent proposals from women who, for one reason or another, can't resist the dubious appeal of a bad boy - even at the risk to their own safety or future happiness.

According to Sylvia Plath - who, admittedly, was a poet and not an evolutionary psychologist - every woman adores a fascist; the swaggering alpha male with a brute, brute heart. And, who knows, perhaps there's something in this; something which also helps to explain the eroticised male attraction to strong leaders and gangsters; a fatal attraction displayed, interestingly, even by sensitive artists and philosophers, whom one might have hoped would know better.

Thus Nietzsche, for example, getting all flustered over the thought of blonde beasts and his insistence that the criminal is actually a type of healthy human being made sick due to unfavourable circumstances ...

Posted by Stephen Alexander at 14:41 No comments: