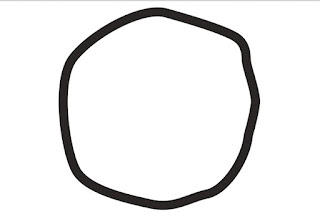 According to recent research, how you see the above geometric shape reveals your political personality: if you see it as a circle (more or less), you are inclined to be liberal in your thinking (inclusive, tolerant, non-judgemental, etc.); if, on the other hand, you see it as it is and describe it as such - an imperfect or irregular ellipse - then you are more likely to be conservative in your thinking (sensitive to difference, wary of deviance, disturbed by things that don't quite fit, etc.).

This tells us something crucial about moral humanists and how they view the world - mistakenly. Or, more accurately and ultimately more dangerously, they see things not as they are, but as they would ideally wish them to be. Liberals are almost wilfully blind to any facts that don't coincide with or reinforce their own political wisdom and moral prejudice.

And this, as Rod Liddle notes in his own inimitable manner, means they suffer from a severe mental impairment - one that effectively makes them self-deluded morons.

I was reminded of this when, shockingly - but not surprisingly to those of us who don't fantasise a great Family of Man all happily holding hands in a circle - news began to slowly emerge of the New Year's Eve events in Cologne, involving large gangs of non-German males systematically and violently assaulting young women.

Because idealists like Mrs Merkel refused to listen to those who voiced legitimate concerns about admitting over a million immigrants from the Islamic world and refused to acknowledge that not everything in this world is perfectly smooth, perfectly round, and perfectly compatible with life in a modern, secular society, female friends of mine in cities across Germany now feel concerned for their safety and for the future. And, to be honest, I don't blame them ...

For those interested in reading the study by Tyler G. Okimoto and Dena M. Gromet on how 'Differences in Sensitivity to Deviance Partly Explain Ideological Divides in Social Policy Support', should pick up a copy of the Journal of Personality and Social Psychology, (American Psychological Association, Nov. 16, 2015).

For those interested in reading Rod Liddle's article in The Spectator (2 Jan 2016) in which he discusses the 'political wisdom of people who don't even know what a circle is', click here.

Posted by Stephen Alexander at 15:42 No comments: