They Eat Donkeys Don't They?

I. Meat is Murder - and So is Traditional Chinese Medicine

I suppose most people are aware of the Chinese practice of grinding up tiger bones and rhinoceros horns in the belief that these things have magico-medicinal properties and can help relieve numerous chronic ailments, cure disease, boost vitality and improve potency.

And I suppose most people are also aware that these crackpot claims lie behind an illegal international trade in body parts from critically endangered species; there are now less than 4000 tigers in the wild and only around 30,000 rhinos.

But how many people, I wonder, are aware of the fact that the Chinese are also responsible for the dramatic decline in donkey numbers, both domestically and abroad? Twenty years ago, China had around 11 million donkeys; now the figure is less than 6 million.

As we will discuss, this, too, is mostly due to the mania for traditional medicine, although the fact that the citizens of the People's Republic of China also like to chow down on donkey meat - including so-called donkey burgers in which chopped or shredded meat is placed within a warm flatbread, known as a shaobing, and seasoned either with green pepper or coriander - is an added factor.

II. How Eeyore is Turned into Ejiao

Ejiao - or, as it is known in English, donkey-hide gelatine - is obtained from the skin of a donkey via a process of drying, soaking and stewing.

What was once believed to be a humble blood tonic, has successfully been re-branded as miracle product and marketed at China's expanding middle class. As well as being found in a wide variety of medicinal goods, ejiao also features in foodstuffs and expensive beauty products; for ejiao is said to not only make you feel better - but look better.

Not surprisingly, therefore, the ejiao industry has now become a global mega-business, with Dong-E E-Jiao, the world’s largest producer, reporting sales of £700 million in 2016.

But there's a problem: according to the ejiao industry's own figures, they process around 4 million donkeys each year, producing 5000 tonnes of gelatine. As domestic supply is capped at less than half this figure - 1.8 million, to be precise - it means manufacturers have to find an extra 2.2 million donkeys elsewhere and are thus heavily reliant upon imported skins often purchased from illicit supply networks at over-inflated prices and an unsustainable rate.

The shortage of genuine Chinese donkey hide has not only sent the cost of raw material through the roof, but it has encouraged the poor in Africa into (literally) selling their asses in order to cash in, undermining the long-term stability of rural economies.


Whilst I'm vaguely sympathetic towards these people being exploited by Sino-capitalism, it's mostly the poor donkeys I feel sorry for; malnourished and mistreated during their short lives, they are then brutally killed and butchered in the unregulated slaughterhouses that can be found popping-up all over Africa, Asia and South America.

As for the Chinese, who keep the ejiao industry grinding on ... one is almost tempted to share Morrissey's assessment of them - though, ultimately, aren't carnophallogocentrism and cruelty defining characteristics of humanity?

For a related post on cruelty towards donkeys and the politics of zoosadism in Pakistan, click here.

Chairman Mao and the Swindle of Traditional Chinese Medicine 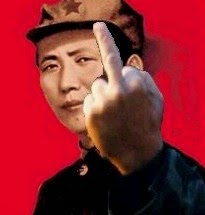 Traditional Chinese Medicine is, of course, an entirely bogus modern phenomenon; a pseudoscience promoted by Chairman Mao that possesses no valid mechanism of action or evidence for its treatments. It's no more effective than the equally dubious remedies offered within European witchcraft.

Not that this stops millions of believers around the world using obscure herbal remedies, ingesting ground up animal parts - such as tiger bone and rhino horn - or having pins stuck in them in order to release a flow of vital energy along the body's meridians. Attempts to locate these mysterious pathways, or to identify this potency known as qi, have so far proved fruitless. Primarily, this is because they don't exist.
Practitioners of alternative medicine, however, don't allow such minor details or anatomical facts to stop them peddling their services and products. If modern knowledge of human physiology and pathology proves problematic to their teachings, they simply start talking about cosmic notions of yin and yang, patterns of harmony and disharmony, or the five phases. Such traditional Chinese wisdom is also, of course, entirely false - if pleasing to metaphysicians everywhere.

Happily, at least some Chinese philosophers are prepared to admit as much. In 2006, for example, Zhang Gongyao published an article entitled 'Farewell to Traditional Chinese Medicine', arguing that TCM in both theory and practice was absurd and should be exposed as such. The Chinese government, however, keenly aware of global export revenues, insisted that it had an important role to play in healthcare and deserved future development.

And this brings us back to Chairman Mao, who, almost single-handedly invented TCM as we know it today. Let me elaborate by summarizing a recent article by Alan Levinovitz, who is an assistant professor of Chinese Philosophy and Religion at James Madison University ...

Initially, following their victory in the Civil War, the leaders of the Chinese Communist Party ridiculed TCM as irrational and backward; something contrary to the Party's programme of modernization and scientific progress. However, when it became clear that they would never be able to afford to establish a national healthcare programme reliant upon highly skilled doctors, expensive drugs, and advanced surgical techniques, Mao revised this position. Now TCM was proudly held up as a great national resource to be developed in opposition to the bourgeois medicine of capitalist imperialism.

Further, Mao realised that if only the traditional methods could be marketed in the right manner, they could be sold to gullible foreigners. And so the Chinese Communist party set about standardizing TCM into a single theoretical and practical system that could be taught as an alternative (holistic) science concerned with preventative and complimentary healthcare.

Next, they set about providing Westerners with sensational - but faked - evidence of what TCM could do. Eager to subscribe to the myth of the ancient wisdom of the east, this was, outrageously, accepted at face value by large numbers of the public, as well as many professionals who really should have known better. Before long a craze for TCM - particularly acupuncture - boomed and today you can get all kinds of quack treatments on the NHS!

Levinovitz nicely puts this into a cultural and historical context:

"The reason so many people take Chinese medicine seriously, at least in part, is that it  was reinvented by one of the most powerful propaganda machines of all time and then consciously marketed to a West disillusioned by its own spiritual traditions. The timing couldn't have been better. Postmodernism was sweeping the academy, its valuable insights quickly degrading into naïve relativism. Thomas Kuhn had just published his theory of paradigm shifts and scientific revolutions ... Alan Watts was introducing hippies to mind-blowing Eastern philosophy; Joseph Campbell was preaching the power of myth. Sick of Christianity and guilty about past imperialist sins, the West was ready to be healed by Mao's sanitized version of Chinese medicine."

"Ultimately, however, the existence of qi, acupuncture meridians, and the Triple Energizer is no more inherently plausible than that of demons, the four humours, or the healing power of God. It's just that Mao swindled us ..."

My thanks to Zena McKeown for inspiring this post following a recent conversation on the topic.

Posted by Stephen Alexander at 19:06 No comments: