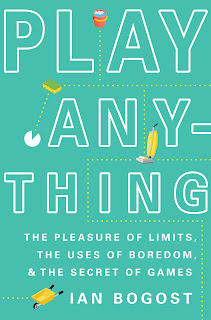 For someone keen to live in the world and not inside his own head - an admirable goal, that every post-Lawrentian must surely approve of - Bogost thinks and writes a lot about himself, his young daughter, and his lawn. He justifies this, however, by crediting his child with showing him how to transform the boredom and misery of everyday life into fun and the grass with teaching him to work with the world on its own terms.

Not that fun is Bogost's ultimate goal; that would be meaning. For whilst he wants to find novelty in familiar situations - his definition of fun - mostly he longs for meaningful experience. And that, he suggests, involves an immersive realism that counters the pervasive irony of today. Once we discover not only what things do and how they work, but what they "obviously and truly are" [9], then we'll be better able to thrive and flourish in an ultimately indifferent universe.

I have to say, I like this idea of not retreating further and further into the self and of replacing mindfulness with worldfulness. But, on the other hand, I have problems with his definition of irony as a method for keeping reality at bay that is born of a fear of the world and the world's "incompatibility with our own desires" [10].

That's certainly not how I understand irony. It allows perspective on the world by creating a certain pathos of distance, that's true. But irony is born of sophisticated critical intelligence, not fear, and it's irony that allows us not only to gain perspective but, ultimately, make distinctions and give value to things within - to use another Nietzschean phrase - an order of rank.

For contrary to what Bogost asserts, I believe there are things "impervious to manipulation" [12] by human beings. He wants to meet the world, "more than halfway" [20], but it's still simply so he can make it ready-to-hand as Heidegger would say: "Living playfully isn't about you, it turns out. It's about everything else, and what you manage to do with it." [26]

Ch. 2: Ironoia, the Mistrust of Things

Bogost develops his critique of irony, which he describes as a "prevailing aesthetic in popular culture" [33], as well as an affliction and the "great error of our age" [34]. He doesn't like it, 'cos he can't quite read it's meaning; it's like receiving a wink from a sexbot "you think you know what it means, until you realize the signal you took for meaning emanates from a source for which meaning is meaningless" [36].

That's a nice line; but it fails to convince me to reject irony and embrace sincerity. I have no problem with the seductive deception of the sexbot. Nor does her wink instill in me a general mistrust of things - or ironoia, as Bogost calls it. I don't use irony as a kind onto-prophylactic to make me feel safe. And if, as Bogost claims, irony ultimately fails to protect us from the reality of the world and becomes a "death march into nihilism" [42] and nostalgia - well, isn't that ironic?

And what does Bogost propose in place of irony? It seems to be something very much like the myth and the metaphysics of presence! He wants to know (and to touch) the world directly. Derrida must be spinning in his grave at this new demand for immediate access to meaning and an end to all indeterminacy and différance.

Even Graham Harman, who, by his own admission, has never been a great fan of Derrida and thinks the French philosopher's attempt to deconstruct presence follows a profoundly mistaken path, agrees with Heidegger that being is not presence and that the latter has, therefore, to be countered as an idea within any school of philosophical realism worthy of the name, including object-oriented ontology.

In as much as things are always withdrawn at some level and vacuum-sealed, we can only ever really know the world in translation, as it were. Or metaphorically. Or ... ironically.

Fun isn't pleasure, says Bogost, it's novelty. I'm not sure, but I think Freud said something very similar; that whereas children are perfectly happy to repeat things over and over, adult enjoyment requires novelty as its precondition.

But what Roland Barthes taught us is not to mistake the mere stereotype of novelty for newness. It's only the latter, newness, in its absolute and often most shocking form, that results in bliss.

But what is bliss? For Barthes, it's more fatal than fun; it imposes a loss of some kind and brings the subject to a point of crisis. For Bogost, on the other hand, it means "giving yourself over to the structure of a situation" [83]. Somehow, that doesn't quite sound as sexy to me.

Nor does the claim that in order to find the secret novelty hidden in the heart of the everyday object or experience (and thus produce the fun), one must give things one's solemn attention and not treat them in a disrespectful and superficial manner. Fun requires persistence and seriousness and dignity. Bogost writes:

"So long as we are unwilling or unable to consider a set of actions as serious and intentional, even when those actions are mustered in the service of a seemingly absurd, foolish activity or end, then we will never be able to experience fun." [88]

And that's unfortunate, because fun is the antidote to irony:

"If irony represents the crack in the universe through which distrust and anxiety about living in a world full of surplus arises, then fun offers a glue with which we can seal those cracks and restore dignity to all the things we encounter - including ourselves." [89]

Here then is one more difference between Nietzsche and Bogost; whilst the former offers us a vision of the Übermensch, the latter fantasises about some kind of moral Sekundenkleber in a desperate and laughable attempt to put poor Humpty Dumpty together again. Has he not heard that all life is a process of breaking down ...?

In play, then, for Bogost, we draw ever closer to things until we ultimately "meld with them" [92] in a big sticky unified mess. I suppose that's a goal for those who want it. But I don't want glued-together wholeness; I prefer cracks and fragmentation and if I believe in anything, then I believe in the ruins.

And so, whether play is an experience had with things, or, as Bogost claims, a property of things themselves, the more I hear him mention the idea, the more set against it I feel. It may well be impossible "to fully separate ourselves from the things that surround us" [101], but we can surely try not to be overly-intimate.

Just to be clear: I'm not saying I want to keep things at arm's length - which would make me an ironoiac according to Bogost - but I don't want to be forced to embrace everything and experience the world in obscene close-up. This isn't due to some kind of pathological phobia; discretion and reserve are signs of sovereignty as far as I'm concerned.

The strange thing is that Bogost himself promotes an ethic of respectful letting-be, that I would quite happily endorse. Rather than attempting to subsume objects, events, and other people into our own sphere of being and influence - or our system of values - we should, he writes, let them play in their own manner.

Only "by addressing each thing for what it is, while all the while acknowledging that [nothing is] ... ours to address in the first place" [119], can they (or we) find freedom and fulfilment; or pleasure and meaning as Bogost insists on calling these things.

Ian Bogost, Play Anything, (Basic Books, 2016). All page numbers given in square brackets refer to this hardback edition.

To read the third and final part of this review - covering Chapters 5-7 - click here.

To read the first part of this review - notes on a Preface - click here.

Posted by Stephen Alexander at 15:40 No comments: