In Praise of The Persuaders! 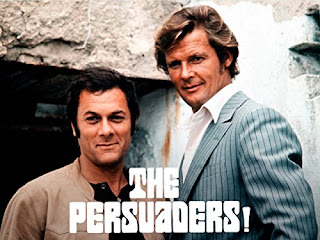 I'm very grateful to True Entertainment for currently re-running all 24 episodes of The Persuaders! that were originally broadcast on ITV between September 1971 and February '72.

For in so doing, they afford viewers such as myself the opportunity not only to enjoy once more the unique acting abilities of Mssrs. Curtis and Moore and the fascinating on-screen chemistry between them, but also to relish the fabulous fashions of the period, the sensational theme tune by John Barry, and take nostalgic delight in memories of childhood and this golden age of British television, which is tarnished only by the politically correct retro-analysis of critics keen to suck the fun out of everything and denigrate the past (such as those insufferable bores on Channel 4's It Was Alright in the 70s).

Played mostly for laughs, The Persuaders! is an action-adventure series starring a post-Boston Strangler Tony Curtis and a post-Saint but pre-Bond Roger Moore, as two rich, good-looking, but ever-so-slightly over the hill playboys - Danny Wilde and Brett Sinclair - who have a taste for danger and a talent for solving crime, as well as a penchant for living the high life in the company of a succession of beautiful women.

The series, devised and produced by Robert S. Baker, was filmed on the Continent, as well as in the UK, at a time when Europe was still regarded as a sophisticated, glamorous, rather exotic location and not as - well, how do we see Europe today in the age of Easy Jet, the migrant crisis, and Brexit ...?

Perhaps because of its French and Italian locations and Ferrero Rocher aspects, the show was extremely popular in these countries, as well as in Germany, Spain, and Sweden. Indeed, The Persuaders! persists to this day in the cultural imagination of film-makers and audiences across Europe. Only the Americans seemed unimpressed, even though it was made with the profitable US market in mind. ABC, who aired the show on Saturday nights against Mission: Impossible over on CBS, were so disappointed with its ratings that they pulled the series before it completed its 24 episode run.

The relationship between the two characters is meant to be in the odd-couple vein; Wilde is the brash New Yorker who escaped the violence and deprivation of his upbringing to become a self-made millionaire; Sinclair the polished Englishman, well-educated and from a privileged background. This is made clear in the opening title sequence, which consists of a visual biography using a clever split-screen technique that was designed so that neither actor would appear to have top billing; something that both men stipulated when they agreed to co-star.

Despite instantly disliking one another when they first meet, Danny and Brett soon develop an affectionate - if highly competitive - relationship that borders on being what we today like to term a bromance. Thus, although red-blooded heterosexuals, they seem only to have eyes for one another (unless there's a mirror around) and are often in close and playful physical contact.

Sadly, according to Lew Grade and other insiders on the show, Curtis and Moore didn't get along so gaily as their characters, either on or off set - although it should be noted that both actors denied there was any animosity between them and each maintained that, whilst very different people, they had an amicable working relationship.

Thankfully, a big-screen remake announced in 2007, starring George Clooney and Hugh Grant in the roles of Wilde and Sinclair, seems to have come to nothing.


Click here to enjoy the opening credits and theme to The Persuaders!

Posted by Stephen Alexander at 15:30 No comments: