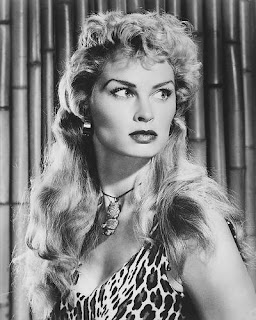 Just like Joey Ramone, I have a penchant for jungle girls in general with their animal skin bikinis, running barefoot through the forest or swinging through the trees. There's surely no disputing, however, that Sheena is queen of them all ...

Created by the American duo Jerry Iger and Will Eisner, Sheena strangely enough made her debut in a British magazine in January 1937, before starring in a US comic book the following year, inspiring a host of imitators during the period that followed, such as the raven-haired Princess Pantha, who made her debut in 1946.


Like Tarzan, Sheena was an orphan who grew up in the jungle; albeit under the guardianship of a native witch doctor. Possessing an uncanny ability to communicate with wild animals, Sheena was also highly proficient in fighting with all manner of weapons. Her adventures often involved violent encounters with savage tribes, slave traders, and great white hunters.


In the mid-1950s, a 26-episode TV series aired with the pin-up Irish McCalla portraying Sheena. Others, including Tanya Roberts and, more recently, Gena Lee Nolin, have also taken on the role of jungle queen, but none have surpassed the performance given by the girl from Nebraska. For even though, by her own admission, she couldn't really act, Miss McCalla had an Amazonian physique, a wild look in her eye, and she was prepared to do her own stunts.


I don't know for sure, but I suspect it was Irish McCalla whom Joey Ramone was thinking of when he wrote the classic 1977 track Sheena is a Punk Rocker - a song which, according to the man himself, combined the primal sound of punk with surf music and a contemporary vision of the Queen of the Jungle, into (just over) two-and-a-half minutes of pop cultural genius.

Play: The Ramones, Sheena is a Punk Rocker, released as a UK single in May 1977, (Sire Records): click here to view the official video.