Love and Hate in a Very Cold Climate 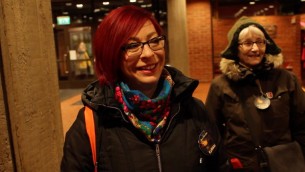 
For idealists, driven by a will to love and insistent upon the notion of a universal humanity, the acceptance of strangers and embrace of foreignness is a desperate moral duty.

Thus it is, for example, that the Sisters of Kyllikki in a determined effort to make migrants feel welcome and demonstrate what a kind and tolerant people the Finns are, have taken to the streets distributing smiles and heart-shaped cards that grant permission to hug and carry other positive messages.

Quite what the women of Cologne and other German cities who were assaulted on New Year's Eve think of this one can only wonder. But I do know that despite what the Sisters of Kyllikki may believe, not everyone wants to be assimilated into a coercive system of reciprocated emotion in which they have no choice but to love and be loved; a system which is happy to generate superficial difference and cultural diversity, but which refuses to conceive of genuine otherness. That is to say, a form of radical alterity that may very well be violently antagonistic.

Why can't privileged white liberals ever quite accept that not everyone wants to be like them? That many feel an almost visceral aversion towards them and what they represent, decisively rejecting what they have to offer. This feeling of hate might be rooted in class, race, religion or a combination of these things. But it's a profound and authentic form of passion that makes our own feelings and values look pale and feeble in comparison.

Baudrillard understands the hate of the un-Enlightened Other better than anyone. In an interview with François Ewald, he says:

"There's something irremediable, irreducible in this. We can offer them all the universal charity we are capable of, try to understand them, try to love them - but there is in them a kind of radical alterity that does not want to be understood, and that will not be understood."

"I have the impression that the gulf is hardening and deepening between a culture of the universal and those singularities that remain. These people cannot allow themselves offensive passions; they don't have the means for them. But contempt is still available to them. I believe they have a profound contempt for us; they dislike us with an irreducible feeling of rejection."
Islamic terrorism is only the most extreme and overt form of this contempt; "a passion of radical vengeance, a kind of absolute reversion that's not about to subside" anytime soon. But, I would suggest, the imported phenomenon of taharrush gamea can also be analysed from the theoretical perspective of hate.

Thus, despite the good offices of Angela Merkel and the huggy women of Finland, one suspects things are going to become increasingly ambiguous in Europe as we wake up to the fact that the world is governed not by a principle of Love and Unity, but by the irreconcilability of evil.

Posted by Stephen Alexander at 11:12 No comments: