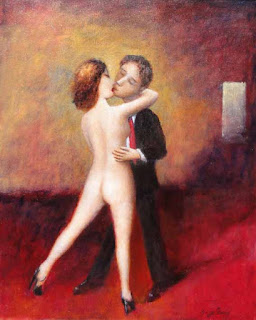 There's been a significant amount of discussion around the question of D. H. Lawrence's sexuality.

Unfortunately, most of it has been conducted in boring, restrictive and ultimately untenable binary terms. And so, despite all the heat generated, there's not been much light shed on the subject. Frequent accusations of misogyny, homophobia, and phallocentrism haven't helped matters either.

Not that these accusations are entirely unjustified. With reference to the latter charge, for example, it's true that Lawrence privileges, fetishizes, and wants to be penetrated by the phallus. But what's most interesting - to me at least - is that he expresses a genderqueer desire in his final novel to be penetrated as a woman, not as a man.

In other words, Lawrence shows signs of anatomic autogynephilia and is clearly excited by the thought of having a female body so that he might experience vaginal as well as anal penetration. He doesn't want to be Mellors, he wants to be Connie and in Lady Chatterley's Lover he is able to intimately describe a woman's lusts, fears, and hopes not because he was in some ways a bit womanly or had a feminine eye for fashion and rugged gamekeepers, but because he's unafraid of exploring an eonistic fantasy of sexo-aesthetic inversion, regardless of the ridicule or opprobrium this would inevitably result in.

Autogynephilia is a term coined by the sexologist Ray Blanchard, to refer to "a man's paraphilic tendency to be sexually aroused by the thought or image of himself as a woman". See 'The concept of autogynephilia and the typology of male gender dysphoria', in The Journal of Nervous and Mental Disease, 177 (10): 616–623 (1989).

Eonism is a term coined by the sexologist Havelock Ellis, which he derived from the name of the 18thC French spy and diplomat, Chevalier d'Éon, who claimed to be a woman in a male body and spent the second half of his life dressed in female clothing. For Ellis, eonism is an extreme form of mimetic identification by the male with the admired object (woman) on what may be a neurotic basis. See Studies in the Psychology of Sex: Volume VII: Eonism and Other Supplementary Studies (1928).

Posted by Stephen Alexander at 11:20 No comments: