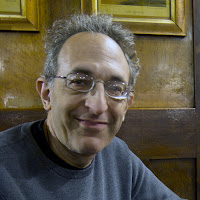 Someone recently compared me to Steven Shaviro, the American philosopher and cultural critic. Whether this comparison flatters, insults, or stands up to scrutiny, I'm not entirely sure; as a Professor of English at Wayne State University and a highly respected author, he's arguably smarter and more successful than me, but, on the other hand, I'm younger and better looking ...

Still, I'm happy to take it as a compliment; for whilst I don't know the gentleman in question, I am familiar with Doom Patrols (1997), Shaviro's theoretical fiction(s) about postmodernism in which he says many things - not necessarily true or accurate, but often witty and stylish - with which I sympathise and might wish to have said myself (You will, Oscar, you will).

I particularly love Shaviro's reading of Andy Warhol and his swish aesthetic. He is absolutely spot on to acknowledge the importance of Warhol and his pimples; an artist who not only understood how to be Greek in the Nietzschean manner (superficial out of profundity), but how to have done with judgement (I approve of what everybody does) - including the judgement of God, but in a far less aggressive, less hysterical fashion than others:

"For Warhol has none of the anxieties that plagued his great Modernist forebears, none of their transgressive urges or buried ressentiment."

Andy simply didn't care if nothing was true and everything permitted. Nor did he worry about substantial things disappearing behind their own shadows and losing their solidity, their palpability, their presence. For as Shaviro says, an artist is somebody who ultimately wants to turn the whole world into a simulacrum:

"It all comes down to images and nothing but images. [...] The critical spirit finds the world to be radically deficient. Images never satisfy it; it always wants something more. But Warhol just shrugs his shoulders, and suggests that enough is enough. The world, for him, is not deficient, but, if anything, overly full."

It's unfortunate, therefore, that even Warhol - by his own admission - simply produced more art junk, thus cluttering up the world still further. To make a little space, it seems, is the most difficult thing of all ...

Posted by Stephen Alexander at 11:28 No comments:

The (Displaced) Task of the Translator 3: On the Limits of Zeitgeistiness - A Post by Simon Solomon 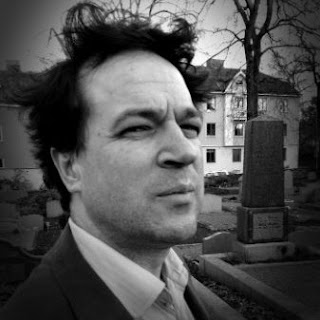 As the late English poet and essayist Geoffrey Hill insisted, in railing against the problem of our post-Romantic (and/or post-modern) suggestibility, every voice worthy of the name will be organised, at least in part, by a sensibility that combines cultural receptivity and counter-cultural resistance, not to mention a creative misreading of similarly strong precursors. Though the exemplary genius of Hegel's world-historical individuals resided in the propensity of such figures to both suffer and amplify the spirit of their time, the transmissions of the artist - and Kenneth Goldsmith's own thesis depicts translation as indisputably artistic - are not merely barometers, pulse-fingering fashion statements, or 'expressive' of a socio-cultural milieu to which they might even be psychoanalytically reduced. If such zeitgeistiness has its claim, it surely also has its limits. Ultimately, while steeped in their age’s particular species of sadness, the most original artists are Janus-faced, both prophetic and nostalgic, and hence ultimately timeless. While it may be true that the machinic flows of technocapital will one day turn us all into its dehumanised vehicles, there is a (perhaps perverse) love in raging against the machine.

As it transpires, Goldsmith seems not to be wholly in earnest about the disappearance of the subject, when one considers the lingering humanism of his discussion of the musician’s practice of sampling and mixing, emphasising as it does the value of 'mindful recontextualization' in a way that makes him seem to want to have his displaced cake and eat it. I find Goldsmith’s depiction of such techniques of conscious transformation especially congenial in relation to my own emerging translation practice around poetic 'convocations', in which I assimilate fragments from other poetries, films and songs into 'baroque' versions of beloved originals. We can and do beg, borrow or steal from other sources in our work as hipsters, creators or long-suffering makers - and, in an accelerating climate of global exchange, licences and permissions cannot in any case always easily be sought - but should never forget Pound’s modernist credo to 'make it new'. The justification for literary theft is the hunger for innovation ...

Finally, some readers might worry more about the apparent submission of Goldsmith's vision of displaced authorship to a political quietism - the way in which, as he himself concedes, 'the displaced text's entwinement with the latest technology […] aligns it with nefarious capitalist tendencies'. Though his whole point is that what he charmingly calls the 'meatspace audience' is missing the point (since life is less and less 'live' - compulsively played out instead behind or by means of a contemporary surplus of devices, apps and screens), one might wonder if he is not so much throwing the translator’s baby out with the bathwater as electrocuting it in a tsunami of technobubbles.

The ominous promise of a new battened-down all-American protectionism across the pond notwithstanding, if globalised capital is essentially a machine that engenders economic, social and cultural flows, the most interesting individuals, and their art, tend to occur where history slows and condenses. Though Goldsmith's poetics of displacement - a vision that highlights the planet-circling journey undertaken by contemporary translation, and the media by which it is carried - is indebted to our culture of hyper-mobility, there is also (thankfully) a dark art of entrenchment. And it’s not going anywhere …

Note: Simon Solomon (aka Dr Simon Thomas) is a poet, translator, critic and tutor. He is a professional member of the Irish Writers Centre, Dublin and currently serves as managing editor with the academic journal Psychoanalysis, Culture and Society. He blogs at simonsolomon.ink and a full (non-abridged) version of his essay will shortly be made available here.

Posted by Stephen Alexander at 11:24 No comments:

On the Death and Attempted Resurrection of the Author 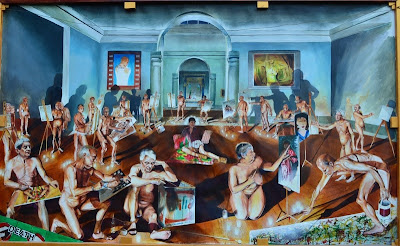 The School of Postmodernism by Vittorio Pelosi (2009)

The conflict between traditional forms of literary criticism and postmodern approaches to the text is best captured in a work by Roland Barthes entitled Critique et Vérité (1966). In this short but brilliant book, Barthes responds with style to an aggressive and vulgar attack upon his reading of Racine by the classical literary scholar Raymond Picard.

For Picard and his supporters, it was crucial to uphold not only their own interpretation of the 17th century dramatist, but to defend the wider truth and glory of French culture from a perceived philosophical assault by a number of new critics of whom Barthes was the best known. Contrary to Barthes, Picard argued that there are objective truths about an author and indisputable facts about a work of art on which everyone who has attained a certain level of education can manage to agree: thanks to the inherent certainties of language, critical consensus is both possible and desirable. To deny this and to contest the author's consciously exercised control over their own work (thereby dissolving the issue of intent), is to threaten this consensus of meaning.

Further, it brings into question the subject's ability to understand themselves and their world with any real confidence or certainty: things are simply no longer as clear cut as they used to be. And for traditionalists and positivists like Picard who value clarity above all else, this cannot be: not only should language strive for transparency, but sentences should be as concise and precise as possible; free from any difficult or unnecessary jargon. In this way, language reflects and furthers common sense - i.e. a form of knowledge that its adherents claim to be perfectly neutral and perfectly natural; free from all prejudice or ideology.

Obviously, Barthes finds all this absurd. He points out how bourgeois ideology is characterized by its refusal to accept itself as an ideology and by its claims that its values and truths are universal (even whilst conveniently coinciding not only with common sense, but also a traditional middle-class model of good taste). For Barthes, those critics who believe that certain things can pass unquestioned (or go without saying) are simply upholding the status quo and the orthodox certainties not of language, but of the Academy.

Ultimately, such critics read badly because they fail to think either in a material manner (in terms of objects) or in an abstract and symbolic manner (in terms of ideas). Thus they are unable to comprehend how language might move beyond being merely communicative in a narrow, functional manner and become a medium in which people can construct new thoughts and images. Picard and friends, who devote themselves to defending the self-evidently Good, True and Beautiful - not to mention what they term the specificity of literature - succeed only in condemning life to an empty, sterile silence and reducing art to sheer banality.

Still, you might be thinking, this is all a long time ago and the new critics eventually won the day. Barthes, Foucault, Derrida, et al all had their work fully assimilated into intellectual culture and the death of the author was widely celebrated across the critical landscape - so why go over all this again?

Well, unfortunately, there are those working today to resurrect the author, or at least dig up and dress up the corpse. Vittorio Pelosi and his fellow Intentists have decided in the name of a new idealism and a new humanism that the reader's interpretation must again give way to authorial intention; that this is what determines the genuine value and meaning of a work. Thus it is that the war against stupidity continues and although Pelosi's poorly executed canvas entitled The School of Postmodernism (2009) reproduced above is "intended" to ridicule and belittle the figures depicted (including Barthes), it only makes me love them (and dislike him) more.

Posted by Stephen Alexander at 13:54 No comments: