'A' Level Greek (with Reference to the Case of Lady Chatterley) 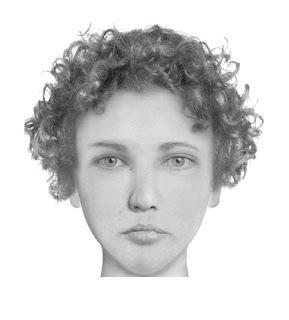 An image created by the digital artist Brian J. Davis
using commercially available composite sketch software
based on Lawrence's descriptions of the character.

For this and other images by Davis go to thecomposites.tumblr.com


In order to reach what is termed her ultimate nakedness - a state of innocence and becoming - Connie is willing to be stripped of her clothes, her social status, and her personal self. She is also willing to be sodomised by her lover in order to free herself of all bad conscience concerning the body.

For it’s not enough within the Lawrentian universe for a woman to be vaginally penetrated by the phallus of the male in order to enter the realm of bliss. She might even be the best bit o' cunt left on earth, but if she wants to learn how to make “weird, wordless cries, like the animals”, then, apparently, she’s going to have to take it up the arse.

Not that she’s entirely comfortable with the act. Indeed, Lawrence writes that Connie is a little startled, and almost unwilling as Mellor’s enters her with no small degree of force, like a devil. But, with what Germaine Greer describes as a rapist’s mindset, Lawrence assures his readers that as the sharp, searing mixture of pain and pleasure forces its way through her bowels and burns her soul to tinder, it’s this phallic hunting out she really desired and needed after all – not love and the lies of poets and philosophers.

Indeed, as she tells Clifford one evening, intellectual pleasures and the life of the spirit mean nothing to a woman in love who has shamelessly experienced the greater reality of the body and discovered that she is not merely a creature of light and virtue, but also alive in corruption. Why read Plato or pray to Jesus when you can quiver like plasm and dance naked in the rain?

The only sin - suggests Lawrence - lies not in the knowledge of evil, or the experience of carnal delight, but in “turning away from the world, from chance, from the truth of bodies”.

Note, however, that the line quoted on the ‘weird, wordless cries’ of animals is from Lawrence’s Kangaroo, ed. Bruce Steele, (Cambridge University Press, 1994), p. 333, and the line quoted about the ‘truth of bodies’ is from Georges Bataille, On Nietzsche, trans. Bruce Boone, (The Athlone Press, 1992), p. 73.

Posted by Stephen Alexander at 17:53 No comments: