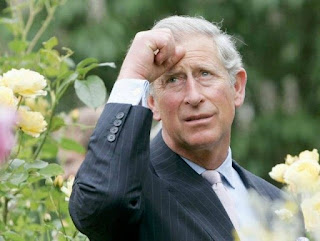 Torpedo the Ark opposes all forms of monarchy, including the House of Windsor.

I wouldn't say I hate them, but I want them to go away - far, far away - and cease to exert any influence upon public life or the cultural imagination.

And if there's one member of this ghastly family of privileged, parasitic inbreds that I want to go further away than the others, it's Charles, Prince of Piffle and would-be King of the Crackpots.

For whilst I can forgive him many things - his love of The Goon Show, his penchant for talking to plants, his fantasy of becoming a tampon, etc. - what I can't overlook is the very real power he has to shape government policy and popular opinion on a wide range of issues, from farming and the environment, to art, architecture and - most worryingly of all - healthcare.

A committed defender of faith and self-professed enemy of the Enlightenment, Charles is clearly a crank who subscribes to some deeply foolish ideas. But, like his former guru, Laurens van der Post, he's also someone with a rather sinister aspect, not above harming others should they challenge these anti-scientific beliefs or frustrate his attempts to have them implemented, as the case of Edzard Ernst demonstrates.

It's nothing short of scandalous that the Prince has been able to pass himself off as an expert in integrated medicine and persuade members of parliament - including government ministers - to take homeopathy, herbalism and other complementary or alternative treatments seriously enough to invest large sums of public money in researching and promoting them.

I don't want the Department of Health to use its limited financial resources on various forms of quackery at the behest of a meddling member of the royal family and whilst I'm all for choice within the NHS, I don't want that choice to include witchcraft, faith healing, or snake oil thank you very much - even if the latter comes with an official royal warrant.

As David Colquhoun, Professor of Pharmacology at University College London, writes: "Questions about health policy are undoubtedly political, and the highly partisan interventions of the Prince in the political process make his behaviour unconstitutional."

Not only does Charles jeopardise the future of the monarchy with his behaviour (which I don't care about), he endangers the health of the nation (about which I do care). As Christopher Hitchens warns: "An awful embarrassment awaits the British if they do not declare for a republic based on verifiable laws and principles, both political and scientific."

David Colquhoun, 'Quacktitioner Royal is a menace to the constitution and public health', The Conversation, (July 30, 2013): click here.

I am grateful to Maria Thanassa for suggesting the topic of this post.

Posted by Stephen Alexander at 15:19 No comments:

I Love Cherries (But I'm Not a Royalist) 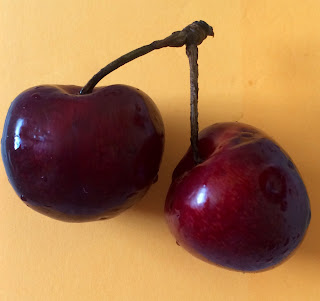 Your tastes change as you get older, so they say.

And, annoyingly - 'cos I hate it when experience lends support to anything that Das Man has to say - I've discovered this summer that I much prefer eating cherries to strawberries.

It's not that I've suddenly been seduced by the somewhat dodgy sexual symbolism of the former, subscribed to by writers including Lawrence (in Sons and Lovers, for example, Paul cruelly pelts poor Miriam with a handful of cherries from atop a very large tree hung thick with scarlet fruit, before then popping her cherry in the pine woods).

Nor is it merely that I find the sleek, cool-fresh cherries more aesthetically pleasing to look at in a bowl.

Rather, I now genuinely like the sophisticated sour sweet taste of them more than the simple sweetness of strawberries which, let's be honest, usually needs to be supplemented with sugar, or enhanced with cream.

So I suppose I should be grateful to Henry VIII who, when not having heads cut off or dissolving monasteries, ordered the introduction of cherries into England at Teynham, in Kent, having tasted them in Flanders.

But the words Thank you, Your Majesty will never pass my lips - not for all the cherries in the world!

Posted by Stephen Alexander at 14:23 No comments: