The Picture of Sebastian Horsley 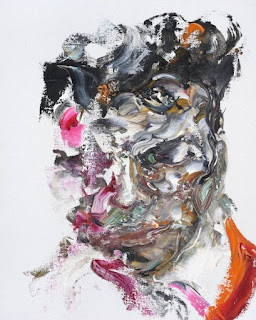 There have only been two deaths that have touched me to the extent that I often dream of the individuals in question and wake up thinking of them. Both men died in the same annus horribilis (2010) and both men I continue to mourn to this day: Malcolm McLaren and Sebastian Horsley.

Malcolm I knew better and for much longer and he had the more profound effect upon me. Sebastian, I met only twice, if I recall correctly, and although we exchanged a few emails - and I attended his funeral at St. James's Church, at the invite of one of his former lovers - I wouldn't say we were friends or close in any respect.

It's rather queer, therefore, that since his death my affection for Horsley has intensified and he has continued to haunt my imagination and dreams. In other words, he means more to me dead than he meant to me alive and perhaps that explains why the (slightly ghoulish) posthumous portraits of Horsley painted by Maggi Hambling continue to fascinate.

Hambling, well-known for her portraits of the dead, has said it's her way of coping with the loss of persons, like Sebastian, to whom she was close, whilst at the same time honouring their memory. It is, of course, a strategy other artists have also employed; see for example Heide Hatry's Icons in Ash project: click here.

Having little talent for image-making, however, this isn't a strategy of mourning that's open to me. All I can do is write little posts like this one, in fond memory; admire the work of others, such as Hambling; and keep dreaming ...

Posted by Stephen Alexander at 07:35 No comments: