Who Knew (that Maupassant was an Objectophile)? 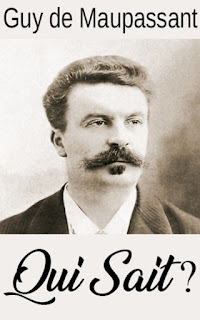 As the clinical sexologist Amy Marsh rightly points out, whilst objectum sexuality is often regarded as a relatively recent phenomenon, it actually possesses a much longer cultural history, as revealed, for example, in classic works of literature, such as Victor Hugo's queer gothic novel of 1831, Notre-Dame de Paris, in which Quasimodo is as passionately attached to the bells of the cathedral, as he is to the beautiful sixteen-year-old gypsy girl Esmeralda:

"He loved them, caressed them, talked to them, understood them. From the carillon in the steeple of the transept to the great bell over the doorway, they all shared his love." [1]

However, I think my favourite instance of objectophilia in 19th-century French literature occurs in Maupassant's short story Qui sait? (1890) ... [2]

In this tale, the anonymous narrator - confined in a psychiatric unit - confesses that he has always been something of a loner, but possessing no particular animosity towards his fellow human beings:

"I have always lived alone because of a certain creeping unease I feel in the presence of other people. I don't know how to explain it. I am not averse to seeing people [...] but if I feel they have been near me for any prolonged period of time, even the closest begin to get so much on my nerves that I have this overwhelming, increasingly urgent desire to see them gone or to go off and be by myself.
It is actually more than a desire. It is a real need, something absolutely essential to me." [275-76]

I used to believe, like the narrator, that there must be many thousands of people who feel this way. But, actually, it turns out that most people don't; they are perfectly content, rather, with being part of a vast, seething mass of humanity. It's only a rare few souls, for example, who cannot travel on a rush hour tube, or step into a crowded lift; and only a queer type of person who finds solitude blissful, rather than a huge, unremitting burden to bear.

Similarly, despite the narrator's insistence on the perfectly normal nature of his (introverted and solipsistic) psychology, it's actually very unusual - or what we might even term perverse - to become emotionally and/or erotically attached to inanimate objects. (It should be noted that I use the term perverse here without any negative connotation or moral judgement attached.)

The narrator informs his readers:

"My house has, or had, become a world in which I lived a solitary yet active life, surrounded by familiar objects, furniture and bibelots as lovable to me as human faces. Little by little I filled my house with these things and I lived in their midst as happily as in the arms of a beloved woman whose warm, familiar embrace has become a prerequisite to a calm, untroubled existence." [277]

That's very lovely, I think. Unfortunately, the tale takes a bizarre twist when the beloved objects stage a revolt and abandon the amorous subject by one night marching out of his house, whilst he watches with astonishment from the garden:

"What I could now hear was the extraordinary sound of steps coming down the stairway and on to the parquet and the carpets - the sound not of shoes or of human footwear but the clatter of wooden and iron crutches clashing like cymbals, or so it seemed. Suddenly, what should I see waddling over the threshold of my own room but the big armchair in which I used to read. It came out into the garden. Others from the drawing room followed it and were followed in turn by low settees crawling crocodile-like along on their squat little legs. All my other chairs leapt out like goats, with footstools lolloping alongside.
You can imagine what I felt like! I slid behind some shrubbery and remained crouching there watching the procession continue to pass by, for they were all leaving, one after the other, quickly or slowly, according to size and weight. My piano, my full-size grand piano galloped wildly past me with a musical murmur in its flank; the smallest objects such as hairbrushes and crystal chandelier droplets crawled like ants on the ground accompanied by glass goblets on which the moonlight cast little glow-worms of phosphorescence; curtains, hangings, tapestries spread like pools and stretched out octopus-like tentacles of fabric as they swam past. My desk hove into view, a rare eighteenth-century piece now containing some photographs and all the letters tracing the sad history of my painful love-life.
I suddenly lost my fear. I threw myself on it and held it down as if it had been a [...] woman attempting to flee. However, there was no stopping it and despite all my angry efforts I could not even slow down its inexorable progress. In my desperate struggle against this appalling power I was thrown to the ground, then rolled over and dragged along the gravel. In no time, the rest of the furniture [...] began to trample all over me, bruising my legs in the process. When I let go of the desk the rest of the pieces careered over my body as a cavalry charge mows down a fallen rider." [279-80]

Talk about revenge of the object ...! Is there anything else even remotely like this in all literature?

The tale's English translator, Siân Miles, reminds us that the French composer Paul Dukas used the idea of a "mysterious and threatening proliferation of avenging objects" [3] in his symphonic poem L'apprenti sorcier (1897) and that Bret Easton Ellis also incorporated a scene into American Psycho (1991) in which Patrick Bateman is stalked by an anthropomorphised park bench, but that's really about it (I think, though would love to know of further examples).

[1] These lines from The Hunchback of Notre-Dame, translated by  Walter J. Cobb (Signet Classics, 1964), are quoted by Amy Marsh in her article 'Love Among the Objectum Sexuals', in the Electronic Journal of Human Sexuality, (Vol. 13, 1 March, 2010): click here.

[2] Guy de Maupassant, 'Who Knows?', A Parisian Affair and Other Stories, trans, Siân Miles, (Penguin Books, 2004). All page numbers given in the text refer to this edition.

[3] Siân Miles, Notes to 'Who Knows?', by Guy de Maupassant, in A Parisian Affair and Other Stories, ibid., p. 320. Miles mistakenly claims that Dukas composed his work twenty-five years earlier than Maupassant wrote his short story, but, as a matter of fact, he only completed it in 1897, i.e., seven years after Qui sait? was first published. The Sorcerer's Apprentice, as it is known in English, was, of course, based on Goethe's poem Der Zauberlehrling written in 1797.

Those interested in knowing more about the role of objects in fiction and the manner in which inanimate things infiltrate our desires, fantasies, and concepts of self, might find Babette Bärbel Tischleder's The Literary Life of Things (Campus Verlag, 2014) worth reading. I agree with the book's central argument that one of the most important things about literary texts is that they "encourage us to see our practical, emotional, and imaginary engagement with the nonhuman environment in modes that resist any clear-cut distinction of subjects and objects, the physical and the metaphysical, the animate and the inanimate" [18].

Posted by Stephen Alexander at 06:43 No comments: