The Portrait of Madame X 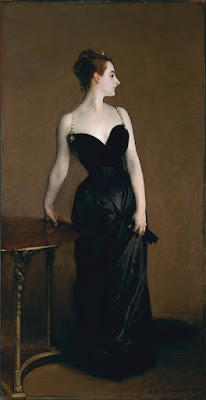 Whilst I appreciate that the American artist John Singer Sargent has great technical ability, I've never been particularly interested in him or his work. Indeed, of the estimated 900 canvases he produced in oil, there's really one that captures my attention: his painting of a young socialite, Virginie Amélie Avegno Gautreau, known as the Portrait of Madame X.

Submitted to the Salon in 1884, this risqué and experimental work was intended to consolidate his growing reputation as a society painter. But, as we shall see, the picture aroused a hostile reaction from the critics and resulted in a public scandal.

II.  Before Madonna, There Was Virginie Gautreau

Virginie Amélie Avegno Gautreau was born in New Orleans, but grew up from the age of eight in France, where she became a socialite known for her unnaturally pale-skinned beauty and hour-glass figure. Although married to a wealthy banker and businessman, Virginie was happy to receive (and encourage) amorous attention from numerous other men. Indeed, her extramarital affairs were the subject of much popular gossip.

It was through one of her wealthy lovers that Virginie was introduced to Sargent, who, keen to advance his own career by capitalizing on her notoriety, pleaded with her to sit for him. She eventually agreed - they were both ambitious American expats after all - and invited him to her home in Brittany. Here, despite his model's lack of discipline and very obvious boredom with the entire process, Sargent made numerous studies in pencil, watercolour and oil - including the work that today hangs in the Met.


III. The Portrait of Madame X

As with many images that caused controversy in late-19th century society, it's difficult for us now to understand what all the fuss was about. But the suggestively coquettish pose and the revealing black satin dress worn by Mme. Gautreau provoked a huge hullabaloo at the time.

One critic wrote that to stand before such a portrait was to instantly be offended (if not, indeed, morally contaminated). What a woman may get up to in her private life was one thing - but to flaunt the fact of her infidelity in public ... Well, that was another matter entirely. Sargent was accused of not only defying artistic convention, but outraging public decency.


Virginie's mother decided she had to intervene; she persuaded her daughter to retire from society until the scandal blew over and she asked Sargent to remove the picture from the Salon. He refused, but did agree to change the title to that which it has been known ever since: The Portrait of Madame X.

He would also, later, when the picture was back in his studio, reposition the fallen right shoulder strap of the dress, rendering the work significantly less provocative - though it was a bit late by then, as the damage to his reputation and to hers had already been done.

Sargent made the wise decision to move to London, as it was clear that he would receive no more portrait commissions in France anytime soon. And it was in England - and later America - that he really made his name. But, by his own admission many years later, he never painted anything better than The Portrait of Madame X.

Readers interested in seeing The Portrait of Madame X for themselves will find it on display in Gallery 771 at the Met Fifth Avenue. For more details, click here. An earlier, unfinished version of the work is in the Tate collection, but not presently on display: click here for details.

Coincidently, Madame X is the title of the fourteenth studio album just released by Madonna (Interscope Records, 2019). However, the title is neither a reference to Mme. Gautreau nor Sargent's portrait. Madonna claims that she was given the name Madame X at the age of 19 by a dance teacher whom she perplexed due to her constantly changing image and identity.

Finally, readers may be interested in a recent post on Rita Hayworth wearing a dress by the French-born American costume designer Jean Louis for the film Gilda (1946), which drew inspiration from Sargent's Portrait of Madame X. Click here.

Posted by Stephen Alexander at 07:02 No comments: