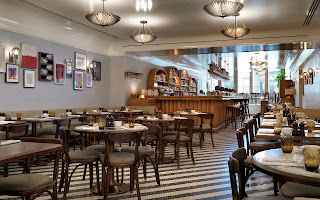 
I finally got to eat at Cecconi's last week, at the Redchurch Townhouse, Shoreditch; something that I've been wanting to do since it opened in October of last year.

Basically a stylish but informal pizza and pasta restaurant, the food and wine is predictable but delicious, and the mostly Italian, mostly female staff are friendly and very easy on the eye. Lunch with Zed should've, therefore, been a perfectly enjoyable occasion.

Unfortunately, however, there was a prick at the next table displaying hegemonic masculine character traits that some - not unfairly - might label toxic; angry, boorish, sexist, super-sensitive to any perceived slight, unable to admit any weakness or failing, etc.

If he was trying to impress the woman he was with on the one hand, he was clearly trying to intimidate the waiter on the other. Thus, for example, when the latter very politely attempted to explain the menu - after being informed of its overly-complex layout - the prick ejaculated: 'I've been to some of the best restaurants around the world so I know how to read a menu.'

A few minutes later, having given his suggestions at how to simplify the menu, he decided he next wanted to discuss staffing levels and complain about what he regarded as a poor quality of service. Then, rather surprisingly, he wanted to know why they didn't lay the tables with white table cloths, as this always adds a little class.

I felt so sorry for the waiting staff. And so sorry for his companion - particularly when, at one point, he left her sitting alone at the table for twenty minutes whilst he took a call on his mobile ...

I don't know what the antidote to this rude, inept, and bullying model of masculinity might be - castration seems a rather drastic last resort - but it would be nice if such men could learn to moderate their own behaviour, check their privilege, and overcome the social and sexual anxiety that surely drives it.